On Friday, 15th January 2016, we had something special to help me celebrate my birthday, the MARTYN BROTHERS with a difference.  Emile was away in New Orleans with his Dad (Barry Martyn), so it was the Martyn Brother (singular) – BEN MARTYN on double bass & vocals, playing here at FARNBOROUGH JAZZ CLUB .  Ben had booked ALLEN BEECHEY on cornet, GEORGE SIMMONDS on trombone, RICHIE HOWARD on clarinet, IAN BEETLESTONE on piano, JOHN ‘flashback radio’ RUSCOE on guitar and DOM COLES  on drums.  Yes, you’ve got it, this was a special with there being seven of them, proving to be a very exciting evening – well they are never anything else, but exciting – plenty of exuberance from these young men. 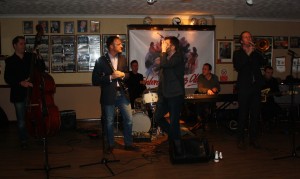 Great to see young men playing ‘traditional’ and ‘New Orleans’ music, and this is how the evening went. They played Hanley’s ‘Saint Louis Blues’ (one of Louis Armstrong’s numbers).  My next choice to mention is ‘Shake That Thing’ of Kid Ory’s Creole Jazz Band fame and they played it absolutely brilliantly, What a front line.   it sure got everyone up to dance.  Then they played a jazzed up version of ‘Just a Little While To Stay Here’, giving it a lot of light and shade – showing their maturity with this music – wonderful. 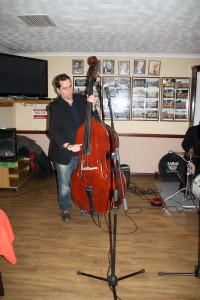 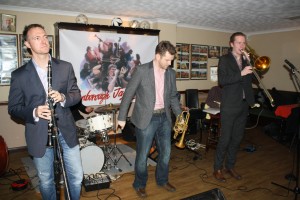 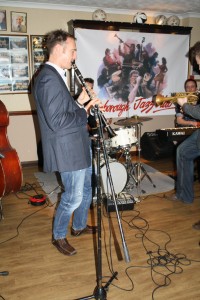 Ben sang and played the piano to his own song ‘My Heart stays In New Orleans’. Not having had a piano with them here before, we had never seen him play one.  It was lovely to see his other ‘bow’.  With the next number, we were up instantly and on the dance floor for our line-dance – ‘Cheek To Cheek’ of course – fantastic.  The ‘engine boys’ certainly did their bit.  Then George sang ‘I’ll Be Glad When You’re Dead You Rascal You’ and what a song, one of those ‘in your face’ songs and George made a great job with it. 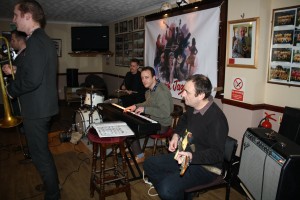 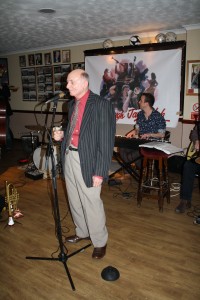 Then Ben called ‘Brown Ale Pete’ (Peter Marr) out of the audience to sing.  Pete chose to sing ‘Rosetta’, it is times like this, I so wished I was recording.  Pete is such a lovely character and sings so well.  Ben followed on with singing ‘The Glory Of Love’, another wonderful singer (oh so many great jazz singers about).  Well, George ended the evening singing a Dixieland number (from the film The Jungle Book’) ‘I Wan’na Be Like You’.  It was Louis Prima and his New Orleans Gang that made this brilliant tune, with the cartoon emulating what he and the boys did whilst playing it.  You can see some rare footage of this and the story behind it, click on: https://www.youtube.com/watch?v=rV8HrpOu1FA   Young George was fabulous singing it too.  Thanks Martyn Boys, for making my birthday such a wonderful one, even though it was actually three days before.  Well, when you get to my age (thirty-several and a bit more) you are glad to reach another one.

Nothing like ‘live’ jazz and great a younger generation is enjoying playing it too.

P.S. I’m sure you will enjoy this watercolour cartoon painting of Keith’s for me.  He’s brilliant, isn’t he.  Do you like my nobbly  knees?  I said he had given me bigger feet than his.  He said of course, I dance more than him – ha. Diane 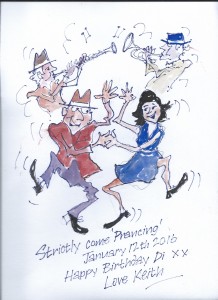