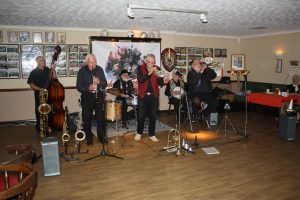 DAVE RANCE’S ROCKIN’ CHAIR BAND is our band booked for tonight at FARNBOROUGH JAZZ CLUB.  That being Friday, 6th April 2018, from 8:00pm till 11:00pm.  Band leader, DAVE RANCE (trumpet & vocals) has booked JOHN AUST (clarinet), GORDON RUSHTON (trombonist), with COLIN FREE (double bass), DOUG PARRY (banjo & guitar) and HENRY HARRISON (drums).  They fare from Leighton Buzzard and have travelled here a few times over the years.  Their last time was in February 2017, so it would be nice of you all to give them a big welcome back.  We have a lovely atmosphere here, so anyone new will always feel at home.  Of course, we have plenty of parking space and a (club prices) Shepherd Neame bar to help.

So come and join your hosts 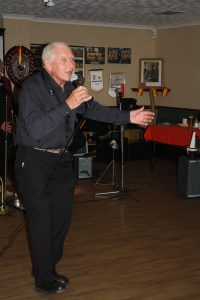 P.S. You may remember last time they were with us, they had DEREK SCOFIELD.  He had a cataract operation a week, or so ago, so not here tonight,  We are wishing him well soon, but please, a warm welcome to JOHN AUST.  Colin played alto, tenor and bass saxes plus piccolo & vocals, and memorably, you may recall, did a little bit of tap dancing too – here is a photo of him.  I will eventually upload the rest in due course.  Also, you will notice GRAHAM WISEMAN was playing trombone with the band in 2016.  Graham played here often.  Remembering him tonight – although a warm welcome to GORDON RUSHTON too. 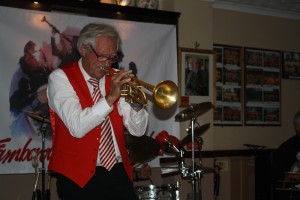 DAVE RANCE’S ROCKIN’ CHAIR BAND will be back at FARNBOROUGH JAZZ CLUB on Friday, 3rd February 2017 from 8:00pm till 11:00pm.  Band leader, DAVE RANCE (trumpet & vocals) has booked DEREK SCOFIELD (clarinet, alto, tenor and bass saxes plus piccolo & vocals, and may well do a little bit of tap dancing too), plus CHRISTINE WOODCOCK (trombonist & vocals) and also MIKE BREWERTON (double bass), DOUG PARRY (banjo & guitar) and HENRY HARRISON (drums).  Christine runs her own band called  ‘Stackyard Stompers’.  It is her first time here, so please give her a warm Farnborough welcome.  Certainly this promises to be a thoroughly enjoyable fun-filled evening, so why don’t you get your bodies over for a taste.  We would like to see you all back to make up for the recent bad weather, supporting this happy little club of ours.  Usual time – 8:00pm till 11:00pm – plenty of parking space and club price bar.

DAVE RANCE’S ROCKIN’ CHAIR BAND was our ‘LIVE’ entertainment at FARNBOROUGH JAZZ CLUB on Friday, 10th June 2016 8:00pm.  Band leader, DAVE RANCE played trumpet and sang, with DEREK SCOFIELD, who also sang.  DEREK also played clarinet, saxophone, tenor and bass saxes, plus piccolo, as well as a little bit of tap dancing (and he is in his mid-80’s too – what a star). GRAHAM WISEMAN was their trombonist (yes, another vocalist) HENRY HARRISON played drums, with MIKE BREWERTON on double bass and DOUG PARRY on banjo and guitar.

(More pictures to come – but not publishing correctly – will work on them!) 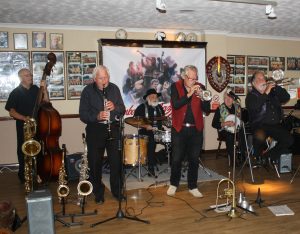 Such a lot of fun, but with not too many people, although those who were there, enjoyed it. They began the evening with one of Louis Armstrong’s numbers – ‘Too Busy’, a lovely happy tune. It was followed on with ‘No-body’s Sweetheart Now’. Derek sang from the middle of the dance floor – a lovely act. Then they all played ‘Creole Bells’ wonderfully – Doug played a lovely solo on banjo. 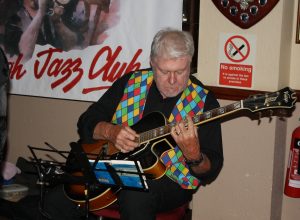 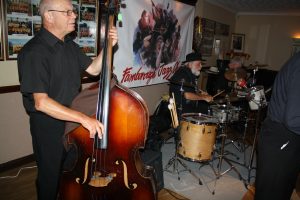 Dave took to the ‘mike’ next, singing ‘If I Had A Talking Picture Of You’, with Henry on drums … standing whilst playing … I think quite unique with trad’ jazz bands.  (Dave used a mute on trumpet).  He then played again some wonderful trumpet to Louis’ ‘When It’s Sleepy Time Down South’, a lovely number. 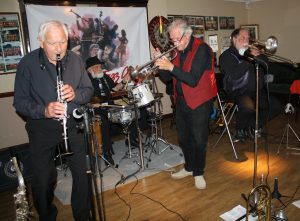 Graham sang (great too) next with ‘Irish Black Bottom’, echoed by Dave, which lured our-line dancers onto the floor. We had so many away, so it was begun by two of our gents, but they were soon joined by two of us females! Yes, just four of us!!!!!!!! But we carried on uninhibited – ha. This was all followed by Dave’s featuring with that Bix Beiderbeck tune, ‘Davenprt Blues’. Well done Dave, super-duper trumpet. Must mention a fabulous drum solo from Henry with ‘Moose March’.

Stumbling’ was a feature for Derek and, once again, did he ‘perform’. He played clarinet and then stepped out into the middle of the floor, singing, whilst tap dancing. Oh what a lovely man, with so much talent. There were more songs, but Derek was featured again, this time on sax with ’Singing The Blues’, some great guitar playing from Doug and the dance floor was in full use.

Their last number was sung by Dave, being ‘Down By The Riverside’. Henry performed a great drum solo again, with Derek playing tenor, clarinet and piccolo!   What a way to end an evening. Thank you everyone, our audience remarked how wonderful you all played. 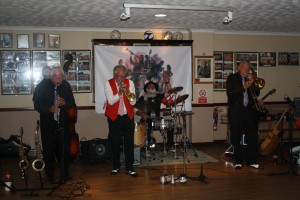 They played some wonderful tunes and my first number to mention is ‘Bourbon Street Parade’, a great favourite, sung by Brian, with Dave harmonizing.  This number encouraged our Steve to get his umbrellas for the brolly parade, just wonderful. 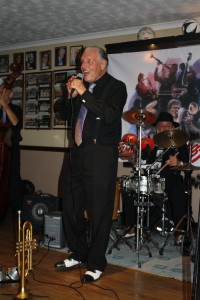 Brian sang again my next choice – ‘Nobody’s Sweetheart Now’.  He sure does have an excellent voice.  Oh and what about ‘Whistling Rufus’?  Not sure that has been played here before.  A lovely old ‘Glen Miller’ favourite of mine came next, being ‘Johnson Rag’, superb playing by Derek on baritone sax – another lovely one to dance to.  We joined in singing ‘Ace in the Hole’, then Dave was featured with the next number, with Brian singing ‘That Old Feeling’.  We performed our line-dance to the next one, ‘Shimmy-Sha-Wobble’, great fun. 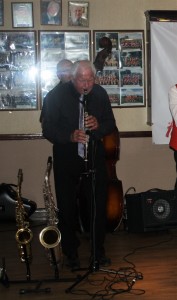 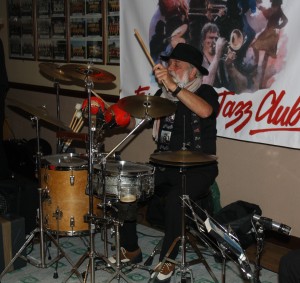 We were then treated to that wonderful ‘act’ by Mike and Henry.  The number?  You’ve guessed it – ‘Big Noise From Winnetka’ and what a performance, just brilliant.  They completed the evening with ‘Lilly of the Valley’, sung by Brian and everyone not only joined in singing, but whilst up on the dance floor too.  Such a lovely evening once again.  Thanks boys, you didn’t disappoint us.  [So sorry no pics of Mike and Doug – these are the only photos that ‘came out’.]