First, let us wish you all a happy New Year.  The GOLDEN EAGLE JAZZ BAND had started our New Year off with some great traditional jazz here at FARNBOROUGH JAZZ CLUB on Friday, 8th January 2016.  The band, leader, KEVIN SCOTT, who plays tenor banjo & vocals, had with him MIKE SCROXTON on trumpet, ALAN CRESSWELL on clarinet, ROY STOKES on trombone & vocals, MIKE BROAD on double bass and PETE JACKMAN on drums. 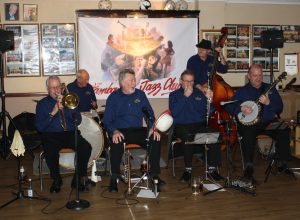 I suggested that with all the festive season’s eating you surely had tucked away, you would most likely be in need of dancing off all those pounds, being the best way to exercise.  Plus after all those repeat TV programs, you must have been in great need of cheering up, so to come and enjoy the music.  Of course some of you were away, but thanks to a nucleus of punters, others turned up.  I know I always mention about this band, being full of fun, but it’s so true.  All bands arrive long before everyone, to prepare and it is a great treat for me, listening to all the banter that goes on.  The jokes, fun and laughter between this particular band was a wonderful way for me to start the New Year, leaving me with tears of laughter in my eyes and I knew they were going to be on good form for our audience and they certainly were.  They began with their first number ‘Exactly Like You’, followed with ‘Shine’. Both lovely numbers and ‘Algiers Stomp’ had us up dancing our line-dance, which all us participants enjoy.   Mike played a brilliant bit of trumpet, when they played ‘Postman’s Lament’ (I think it was sung by Kevin). 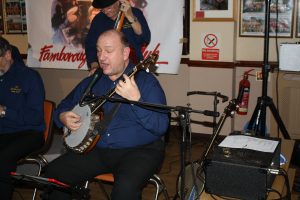 Kevin also sang ‘I’ll See You In My Dreams’, singing it beautifully.  ‘Lord, Lord, Lord, You Sure Been Good to Me’ was then sung by Roy – amazing how so many musicians are fabulous singers, you’d think they were just proficient playing their musical instruments only, but not so. 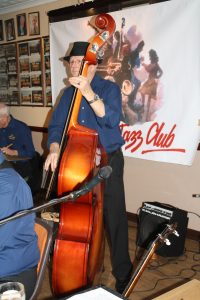 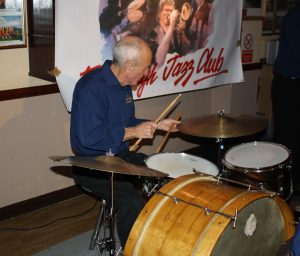 Anyway, Alan was featured next with ‘Wild Cat Blues’, (backed by both Mike (B) and Pete), what an applause he got too.  ‘Sweet Sue’ was another number played with super brilliance by all of them, as with ‘Walking With The King’, which was sung by Roy.  What a great job he does too and quite a good favourite with all the jazzers.  Oh, you must read my write-up back on 11th September 2013, about the next number ‘Collegiate’, such a story I managed to dig up.   They played it brilliantly and finished the evening off with such smiles from both musicians and audience alike.  Looking forward to having them back on 17th June next.

‘Lord, Lord, Lord, You Sure Been Good To Me’ – Traditional Gospel song