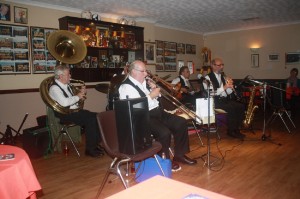 LES HANSCOMBE’S TAILGATE JAZZ BAND is set to return to our Farnborough Jazz Club (Kent) on Friday, 10th February 2017.  Band leader LES, who plays super trombone & sings great too, has booked his usual musicians, BRIAN GILES on trumpet, BRIAN HART on reeds, DEREK PRING on sousaphone, plus OLLIE BENSON on banjo & guitar and JOHNNY BAKER on drums&vocals,  Hopefully, their journey here will be a far better one than last time.  However, let’s give them a warm welcome, just in case it isn’t.  We enjoy ourselves here at Farnborough Jazz Club and tonight, we especially intend doing so, being that Keith had such a close to death experience (come tonight to find out how!), so I intend to celebrate (I haven’t got all my ‘insurance dues’ in from all you owners of Keith’s paintings!).  Plenty of dancing, lovely bar and general fun – you bet.

Keeping jazz ‘live’ by your hosts,

LES HANSCOMBE’S TAILGATE JAZZ BAND entertained us at our Farnborough Jazz Club (Kent) on 10th October 2014. Unfortunately, they had a horrendous journey to us, taking an hour to get over the QE2 Bridge, caused by road works. BRIAN GILES was to have been on trumpet, but did not make it due to personal problems. However, the rest of the band were band leader LES, who plays magical trombone, BRIAN HART on reeds, BRIAN STAPELY on drums (yep, would have been three Brian’s!), DEREK PRING on sousaphone, plus OLLIE BENSON on banjo & guitar. Although our old friend Brian Giles was missing, the band were superb.

It was very difficult for them, because they had chosen the repertoire to include a trumpet, but you wouldn’t have guessed, they were so relaxed. The numbers they chose to play instead (at short notice) was wonderful and again, has made it difficult for me to choose what not to include in this newsletter (I don’t like to give too much of their repertoire away). However, here is a little insight into the evening. I missed the name of their first number, so I begin with ‘Saratoga Swing’, a super Duke Ellington number. This was followed by ‘Exactly Like You’ sung by Ollie. I noticed Brian (H) played tenor sax and with Derek on sousaphone, made it a fabulous number. As for ‘Georgia’, Les sang it beautifully and was a lovely one to include. It brought on a few dancers. Then Les sang ‘I’ve Got a Feeling, I’m Falling’, which brought practically everyone onto the dance floor, being a lovely 1920’s tempo. ‘All God’s Chillun Got Rhythm’ was another fabulous 1920’s sound and on came our line-dancers, well, all three of us! But then ‘My Dear Mr Shane’ (Oops sorry, that is my title for the song) or to give its correct name ‘Bei Mir Bist Du Shon’ did bring on our line-dancers, excluding me (are they trying to tell me something, ha). I was jiving with Steve – phew, pretty fast stuff, especially as it was featuring Brian (S) on drums (fabulous). 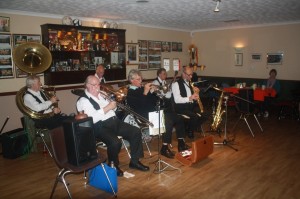 Trumpeter John Longley was in our audience, who has his own band, the ‘Halstead Hotshots’ and plays regularly (this and every 2nd Tuesday each month, 2.00-4.00pm) at the Cock Inn, Halstead, Kent. Anyway, he joined the band for a few numbers, one being ‘When It’s Darkness on the Delta’. John sang and showed he also has a super voice. I just loved the following Glen Miller number, ‘Little Man Who Wasn’t There’. What a fabulous number, sung by Les. We were nearing the end of the evening, so they chose to play ‘Get Out Of here and Go On Home’ (again sung by John) and if the band thought they were going on home, they had another think coming, because the audience yelled for “more”. Of course they did give more, playing their hearts out with ‘Dallas Blues’. So there, you’ve got it, another Friday evening of ‘live’ jazz which was certainly enjoyed by everyone present. We do have so much fun dancing which keeps one fit AND you can forget all problems of the week, so why not join us next Friday. We have that hugely popular band ‘Bob Dwyer’s Bix & Pieces’ back again.

‘Go On Out Of Here’ – Buddy Bolden (need to check later if he wrote it – anybody tell me?)

LES HANSCOMBE’S TAILGATE JAZZ BAND made their second appearance on 31st January 2014 at Farnborough Jazz Club (Kent).  Unfortunately, my computer was ‘down’ when they first visited us on 28th June 2013, but Keith and I can recall they were a wonderful traditional jazz band.  The musicians who played this time with leader and trombonist LES, were BRIAN GILES on trumpet, BRIAN HART on reeds, BRIAN STAPELY on drums (yep, three Brian’s!), GERRY HOSKINS on double bass, plus OLLIE BENSON on banjo & guitar. After the previous week, with a lot of you missing for one reason, or another, last week I asked you to please return to the fold, so we could show Les and band a warm welcome back.  I am so sorry I asked you, because (although still lean on the ground), many of you did push yourselves to come.  The reason for having to push yourselves, was no reflection on the band, it was due to more dreadful weather conditions endured to get here.  Yes, tons more rain.  The band made it through the flooding, but a lot of you were once again missing.  Perfectly understandable, but to everyone who made an effort, we thank you so much for giving the band a warm welcome back.   Gordon, one of our main dancers, turned up, although still out of commission for dancing, so some of our ladies did asked nicely for a dance from some of you shy guys, which did make a change aye?  No seriously, we have plenty of fun, with or without dancing.   ‘Back Home Again in Indiana’ was the first number noted down , then  Les sang the next number called ‘Look Down that Lonesome Road’, with Brian H playing tenor sax.  I wrote ‘really lovely number’ to next one, called ‘Mama’s Gone, Goodbye’.  It has a lovely 1920ish happy beat, so plenty of dancing. Ollie brought out the guitar and Brian S played a lovely drum solo to ‘On Treasure Island’.  This number was a ‘No.1 hit’ for Tommy Dorsey, definitely one for dancing too. The band was in a happy mood with their choice of numbers.  They were all very melodic.  The next one was ‘You Came out of Nowhere’, with Brian G on trumpet, using a mute on and off throughout the number and Brian H playing tenor sax, wonderful.  Next number Les sang to and Brian H chose to play clarinet with ‘All God’s Chillun Got Rhythm’, another good dancing number.  Then a lovely start with ‘engine’ only to ‘The World is Waiting for Sunrise’ (being Brian S giving great drum solo, plus Gerry and Ollie) and then ‘Bei Mir Bist Du Shon’ followed.  I wrote ‘great drums, great guitar, great trombone, oh what the heck, great all!’  My last number written down was ‘Creole Love Call’ I wrote ‘yeah’.  What a simply lovely feeling the band left us with.  Les’s Band will return on 10th October 2014.