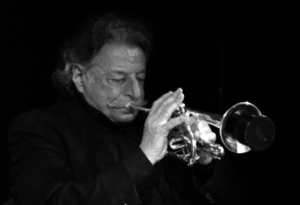 LIMEHOUSE JAZZBAND, a 10piece band from Holland, returned to play for us limeys here at FARNBOROUGH JAZZ CLUB on Friday, 24th October 2014 as part of their 2014 Tour. They have included us in their tours since 2008 (possibly earlier – I’m still unable to access an old computer at present). Robert is such a great personality, with a wonderful sense of humour and super with intros. 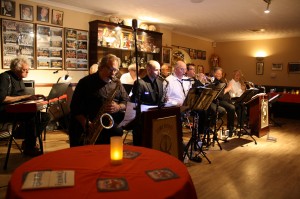 The lineup has changed a bit since their last visit. ROBERT DUIS was first cornet and leader (for the last time), with GUIDO CORNET on second cornet and tutor (what a great name for a cornetist aye). Plus RUUD PETRI on trombone, HENRI GIEBELS on tenor sax, clarinet and vocals. Also WILLEM HELLBREKER was on first alto sax and clarinet, plus MARTEN DE NES on second alto sax and clarinet. Then there was SIR WIL VAN SCHAIK on banjo, LOUËS HOUET on piano and PIETER VOS on tuba and last to mention, but by no means least, ROB BAKKER on percussion, washboard and vocals. 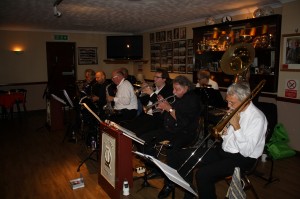 My notes were sparse, so will not depict their whole picture. Unfortunately, the band were held up for hours at the Dartford Bridge crossing, so were unable to swing by their hotel to sign in before going to play at London’s ‘Spice of Life’. Robert asked me to get in touch with the hotel to confirm their booking, knowing they would not arrive there much before 1.00am. However, I spent an hour trying to obtain contact (trying all sorts of things, including email!). You have to realise, they had ten rooms booked and didn’t want to lose them! Save to say, I missed the first section completely! But I do know, the band did not show any tiredness from their horrible journey, remember they had also played lunchtime too. 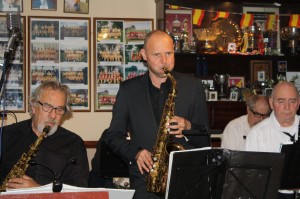 Now what can I tell you of their repertoire?   I do recall Robert announcing a special dedication to the Chinese restaurant they had a meal at, here in Farnborough Village – the song? ‘Shanghai Shuffle’, of course. Lovely one boys. The next number I had noted was ‘Save It Pretty Mama’. It has a lovely beat, so certainly brought on the dancers. ‘Borneo’ is another fun number (by the way, was recorded by The Muppets), followed by another Fox Trot (yes, dancers on again) ‘Chloe, (Song of the Swamp)’. We were all asked what we wanted them to play next, ‘Three Blind Mice’, or ‘Krazy Kat’ and we yelled out ‘Krazy Kat’. Certainly a bit of fun, both Bix Beiderbecke numbers. Duke Ellington’s ‘The Mooche’ came next, with Fats Waller’s ‘Looking Good, But Feeling Bad’, which was certainly one for our line-dance (performed by three of us, yes I said three, still, it gives us a little laugh). But then the next number lured all dancers on the floor with Fletcher Henderson’s number, ‘Hot Mustard’. Then McKinneys’s Cotton Pickers’ Fox Trot ‘Plain Dirt’ certainly continued to give the dancers more enjoyment. What a nice thought from their last tune, when announced as ‘Christmas in Farnborough’, obviously Louis Armstrong’s ‘Christmas in New Orleans’. Of course, in return, ledereen bij ons Farnborough Jazz Club wenst de Limehouse Jazzband een zeer fijne feestdagen en een Gelukkig Nieuwjaar.

As an extra surprise, we had also arranged for them to appear at the Orpington Conservative Club on Saturday, 25th October 2014. Not a huge audience, but none-the-less, they performed with the same warmth and everyone enjoyed the concert. It had already been announced that Robert, after 12years as their leader, was retiring (Pieter Vos will be leader). So Robert, het was een genoegen te hebben gehad dat je speelt voor ons op onze Farnborough Jazz Club over meerdere jaren. Keith en ik, in het bijzonder, wensen u een lang en ontspannen pensioen. Blijf goed en wel om u te hebben gekend. We hopen te ontmoeten met u, als we winnen de Euro Loterij – hmmm. Liefs en kusjes van ons limeys om alles wat je Limers. xx

Listen to Marten de Nes’ recording of ‘Hushabye’ on You Tube: http://youtu.be/-Yx-H9k4yWU 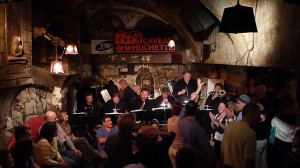 Cheers everybody, from us Limeys