This happy band has been a big favourite with you on previous appearances and once again, they maintained that popularity contest. Lovely to see the party of ten new people arrive, brought by a couple who visited us a few weeks ago. We’d love to see you again, you are great dancers. The band usually starts off with their signature tune, but for a change, they decided to play ‘Royal Garden Blues’, an equally happy number. The next number I wish to mention is ‘See See (or CC) Rider’. It was the number to bring out plenty of dancers. ‘Bugle Boy March’ followed on and was another great tune to dance to. 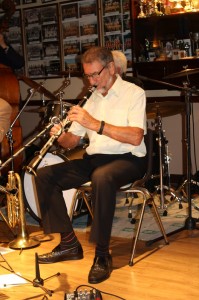 Alan was featured next, playing his wonderful rendition of ‘Petite Fleur’, what a player. They finished the first section with a brilliant performance of ‘Hiawatha Rag’. I was glad they chose to do ‘Ciribiribin’ again, (see my notes about their gig with us on 15 November 2013), because they do play it with great feeling and what about ‘Bourbon Street Parade’! It was sung by Johnny and is such a grand number, bringing smiles to everyone’s faces. A must to mention is Bill’s feature on flugabone, namely ‘Star Dust’, so melodic. Bill plays it how it should be done, beautifully (sorry not to have a picture of him too).  It is so difficult to decide to cut out numbers that have been played so well, but my last choice is ‘Canal Street Blues’. I’m sure they were playing over time, we were all enjoying ourselves I didn’t notice the time and no-one wants to end a happy evening. The number is such a jaunty one, we were all up dancing, so ending on a high. 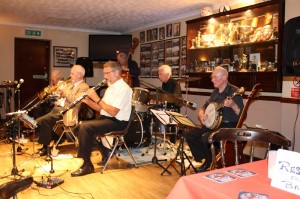 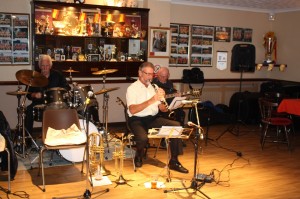 Thanks again guys for entertaining us.

Next Friday’s band is Les Hanscomb’s Tailgate Jazz Band, so see you all then.

P.S. ‘Strictly Come Dancing’ is back and although enjoyable, it is still irritating to hear them play pop music for Latin American dances. How do they expect the stars to learn to dance and put the oomph into a dance with the wrong rhythm or even the tempo! Please organisers, you obviously tell the band to play pop, you’ve got it wrong. Also, can you show your audience how to clap ‘OFF THE BEAT’? Now I know how irritating I was to band leader, Jeff Hatton, who many years ago, taught me how to clap ‘off the beat’. (There, I’ve got that off my chest!)