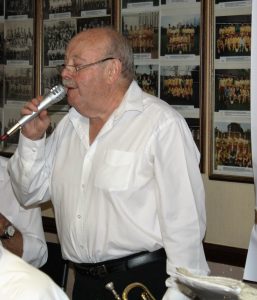 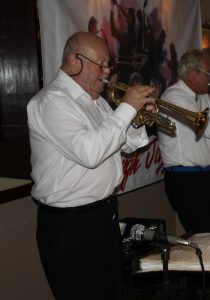 MIKE BARRY’S FRISCO FANATICS are coming to town (well the country side – ha) bringing that ‘West Coast jazz’ sound this Friday, 8th June 2018.  MIKE is bringing some great guys with him especially for you to enjoy both listening and dancing to, at our Farnborough Jazz Club, Kent (BR6 7BA in the Sports Club).  These lovely musicians are to be TONY TEALE on clarinet, LES HANSCOMBE on trombone & vocals, GRAHAM BARTON on piano, JOHN SMITH on banjo, COLIN GRAHAM on sousaphone and BRIAN STAPLEY on drums.  Mike says this band is looking at 1900’s-20’s West Coast sound as played by such bands as ‘Firehouse Five Plus Two’, ‘The Original Salty Dogs Jazz Band’ and ‘Turk Murphy & His Frisco Jazzband’, plus ‘Bob Scobey’s Frisco Band.  All of which had enjoyed the likes of Armstrong’s Hot Five, ‘King’ Oliver Original Dixieland Jazz Band, ‘Bix’ Beiderbecke and not forgetting ‘The Original Dixieland Jazz Band’.   I asked Mike about his cornet and he said it’s a hybrid instrument called a ’cornet-trumpet’!   Well if all this info doesn’t pull you in to our fun jazz club in your hoards (preferably by coach) to enjoy, I don’t think anything will.

Come and join us, your hosts

Diane and Keith (the Granties)