We welcomed ‘BILL PHELAN’S MUSKRAT RAMBLERS’ back again to FARNBOROUGH JAZZ CLUB on Friday, 27th May 2016.    Band leader BILL PHELAN played both trumpet & flugabone.  He was joined by ALAN CRESSWELL, who played clarinet, JOHN FINCH was on trombone, ANDY LAWRENCE, double bass, JOHNNY McCALLUM, banjo & guitar and PAUL NORMAN who played drums.  It was another expected evening of super traditional jazz and they didn’t disappoint us.  Keith and I thought they played the best we had ever heard them too, because they were really enjoying themselves. 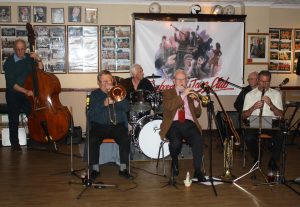 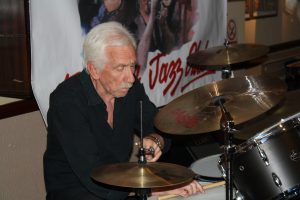 They played some good numbers and here are some of them.  Quite obviously, they always begin their evening with ‘Muskrat Ramble’ and although I was busy ‘on the door’, I recall they all excelled, Paul was brilliant on drums, with everyone taking thunderously good solos.  I also recall Bill joking that Paul doesn’t like the number – ha, he didn’t show it in his playing.

Then on announcing their next number, ‘Ciribiribin’, Alan called out (again jokingly) ‘he doesn’t like this one any better’ – ha.  You may recall I love this tune, as I wrote to one of the composers, Jack Lawrence, (first time ever writing to a composer).  I was contacted by his friend (also Diane), who explained that Jack had died a year before.  He had been answering everyone who wrote, right up until his demise, aged 96 (on 15th March 2009)!  She said it had felt like a time warp, so this number feels special to me (funny, my Mum’s birthday was 15th March).  Continuing on … Bill played wonderful trumpet, with John’s super singing to ‘Big Butter and Egg Man’, with all of us up dancing too. 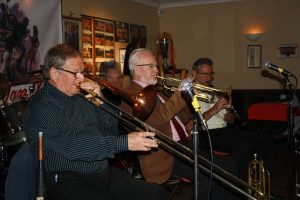 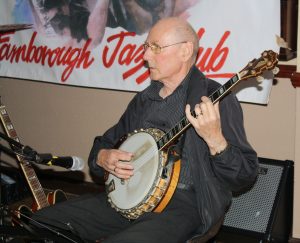 Johnny showed his 20yrs with Chris Barber, when he played solo during the following tune ‘Canal Street Blues’, such a lovely banjo player, as well as guitarist.  Bill was brilliant on trumpet too.  The next tune, ‘Mood Indigo’, we were able to ‘smooch’ to – yes, there were some ‘smooching’ on the floor too, oh I mean dance floor – ha. 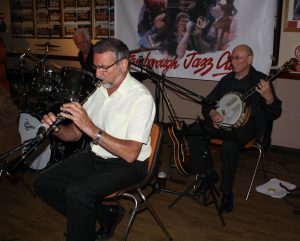 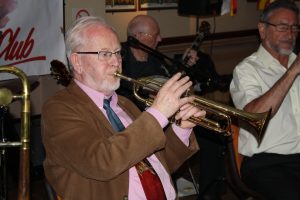 Following on, — Bill played his flugabone as a duet with John (F) on trombone, to ‘Sweet Georgia Brown’.  It was a super sound, then with everybody joining in.  Alan was featured next with ‘Petite Fleur’ and a damn good job he did, playing it so beautifully. 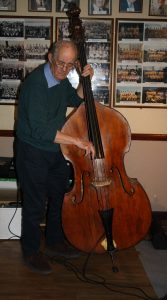 ‘Too Busy’ is a lovely up-tempo number and about five of us performing our line-dance.  Not many aye, but that made it all the more fun and I can remember thinking how great all their solos were – Andy (my great country man – private joke) great on double bass.  I had put a couple of ticks against the following tune ‘Tie Me To Your Apron Strings Again’, because of the lovely sound of John (F) singing and everyone getting up to dance.  ‘Bourbon Street Parade’ is the tune they always like to end the evening with and I wrote the word ‘dynamite’ in my notes – surely I need no other words, do I.