‘BOB DWYER’S BIX & PIECES’ was at the Farnborough Jazz Club, Kent (BR6 7BA), On Friday, 10th July 2015, BOB on trombone & vocals, had MAX EMMONS on trumpet, BERNIE HOLDEN on clarinet & alto sax, JOHN BAYNE on double bass & bass sax, JOHN STUART on banjo & guitar, LAURIE CHESCOE on drums and guest pianist, CHRIS NEWMAN. Remember Chris played last time (1st May), fares from GOSPORT, Hampshire, where he is on the Committee of the Gosport Jazz Club. It was great to see/hear him again. I advertised that night, by saying its good here, isn’t it – we are always having brilliant Fridays, aren’t we? I wasn’t wrong either. We had a decent turnout and as usual, faces were beaming from ear to ear.

They played one of Keith’s favourite, ‘A Hundred Years From Today’, with Bob singing every bit as good as Jack Teagarden. This was followed on with ‘I Found a New Baby’, with some brilliant sax from Bernie, banjo from John (S) and fabulous bass sax (‘big bertha’) from John (B). Max thrilled us all with his harmonica playing and singing of ‘Diggin’ My Potatoes’ and we performed our line-dance to this – phew, we were all exhausted! I remember Ken Colyer’s band playing the next one – ‘Black Cat On the Fence’, a lovely choice and everyone excelled. Bob sung the next number, ‘Kansas City Kitty’, just fabulous. 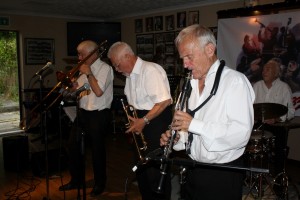 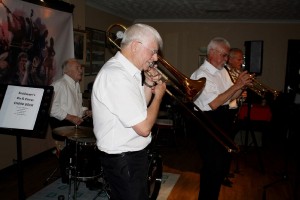 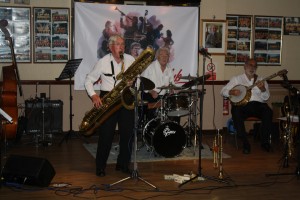 But then no ‘let down’ with the next one, I put three ticks and ‘yes, yes, yes’ on my notes. Well, the number was ‘Elephant Stomp’. Everyone just loves John playing it, we can never tire hearing him play it either. (see Newsletter 1st May 2015 for our recording of him playing on Youtube, not the best recording as just recorded (17oct2014) on my old mobile !)

This was followed with Max singing ‘Down By the Riverside’. Of course, there was some marvellous harmonising from the audience. Bob always sings Keith and my friend’s song (a big hit from the ‘40’s), ‘Nice To Know You Care’. It is a very romantic song and everyone gets up on the dance floor, even Keith dances with me – ha. I will end this write-up with Max’s great performance to ‘Rebecca, Get Your Big Legs Off of Me’. What a fabulous evening again. You just can’t beat ‘live’ music, especially when you have musicians with the experience and talent of the likes of these guys. 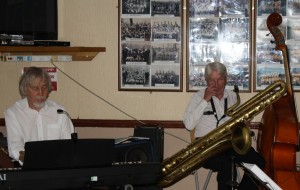 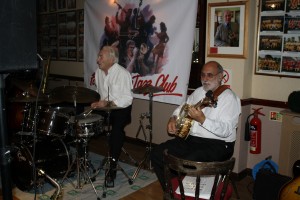 Make a date to come next Friday.