Peter Abbott has been supporting Farnborough Jazz Club for many years and we have gradually learnt of his remarkable World Championship and Para-Olympic achievements.  I shall update as I obtain more informaton.

This is 1992, England team receiving Bronze Medals after beating Germany 6-2 in football. (Peter is second from right) 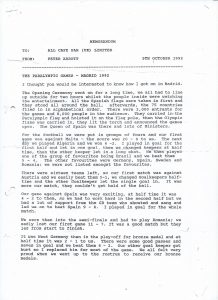 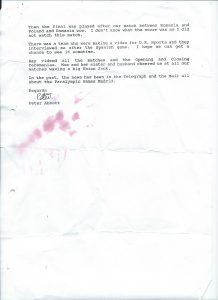 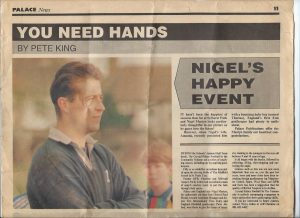 Peter Abbott, England’s Disabled goalkeeper, along with other England professional goalkeepers and managers (such as Nigel Martyn) each gave five hours intensive training, passing on their goalkeeping skills to over 50 youngsters aged between 9yrs and 14yrs. It was with the idea of cultivating more British goalkeepers for the future. It took place at the sports fields at Midfield School in St. Pauls Cray. Newspaper story by Peter King, from Chrystal Palace News in 1992.

The following photo is taken of the day – if you click on it, it will magnify up.  Peter is seen standing at the very back, second one on the left – chimney pot height (wearing a white football shirt with black collar), looking very young of course.  Well, it is back in 1992, so Peter was only 26/27years old.  Perhaps you might even recognise yourselves! 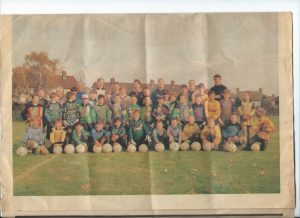 A photo of some 50+ youngsters, who attended sports fields at Midfield School in St. Pauls Cray, taken in 1992. Each received some five hours intensive training from England’s top professional goalkeepers. Peter Abbott, who was England’s Disabled goalkeeper, was one. Other England professionals included Nigel Martyn and Eire’s International manager Theo Folley, (passing on their goalkeeping skills. with the idea of cultivating more British goalkeepers for the future). Newspaper story taken from Peter King of Chrystal Palace News in 1992. 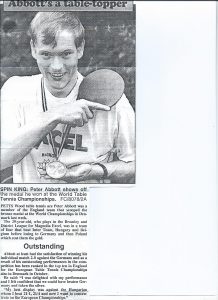 Peter Abbott winner of a bronze medal at the World Championships in Denmark for Table Tennis.

I need to check out what year this was – worked it out that it was in 1994, but nothing confirmed yet.

I shall return with much more, so keep popping back. 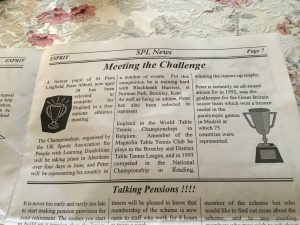 And he can dance!