The band was formed 24 years ago by clarinettist ROBIN COOMBS as a six-piece group (although now playing as a seven-pce band).  In 1994, the addition of a pianist enabled the band to extend its repertoire and widen its general appeal. Very few changes of personnel have taken place over the years and the original three “front liners” – clarinet, trumpet and trombone are still playing together (on a good night!)

The repertoire consists mostly of well-known pieces penned by the great popular music composers of the 1920’s up to the middle of the last century – Duke Ellington, WC Handy, Hoagy Carmichael, Jelly Roll Morton, Louis Armstrong and Scott Joplin to name just a few.

Since 2004, the band has also entertained on various cruise ships sailing around the world.

Recently, the band has been re-formed and for the time-being,

The Members of the Band consists of:

ROBIN COOMBS (leader/clarinet) has known Keith, since his (Keith’s) racing days 40yrs ago.

PAUL HIGGS (trumpet) is renowned as one of the UK’s leading trumpet players and composers.  Blending the traditions of classical and jazz, he has the rare ability to capture the most elusive of dreams in his music, expressing subtle emotions and bold exciting energy with equal ease. Melodies soar and float, while rich harmonies create shadows and depths beneath.  Paul has had an extensive musical career in many fields including performing, composing and arranging music for film, TV and theatre. He was a Musical Director for many years for the National Theatre and Royal Shakespeare Company.   He has performed with luminaries including Sir Peter Maxwell Davis, BBC Philharmonic Orchestra, Johnny Dankworth, Lulu, Tony Hatch, John Williams, Nancy Wilson and Shorty Rodgers. Paul has also performed in major concert venues around the world, such as the Royal Festival Hall, the Schubert Theatre (USA), Berlin Concert Hall, the Royal Albert Hall and Ronnie Scott’s. His website is www.paulhiggs.co .  You should make a visit to listen to his beautiful playing.

JOHN STUART (banjo & guitar) and Keith were both in The Manhatton Jazz Band, plus John played in Keith’s own band called ‘The KGB’  (both bands over 20yrs ago).

ROGER CURPHEY (double bass) and Keith were both in Mack White’s quartet, plus Roger played in Keith’s own band called ‘The KGB’  (both bands over 20yrs ago).

ALAN CLARKE (drums) has been a professional musician and drum teacher for over 40 years.  Some of the artists he has worked and recorded with include Nik Kershaw, Jools Holland, Robin Trower, Roy Castle, The Drifters, The Platters & Brian Conley. American artists include Glen Campbell, Kenny Rodgers, Diane Solomon, and the late great BOB HOPE.  West End shows he has played in are, Jesus Christ Superstar, Joseph’s Technicolor Dreamcoat, Boy Band, Jolson the Musical & Cliff the Musical.  His website is www.alanclarkedrums.co.uk  You must also visit and listen to his drum battle with his son, Rob playing ‘Caravan’, just brilliant. 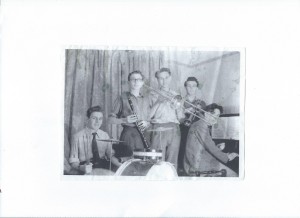 Previous players with the Phoenix Dixieland Jazz Band were

NORMAN BULL (trombone) was in a band (‘The Orion Dixielanders’) with Keith 60yrs ago whilst in their teens. (see photo at foot of page) 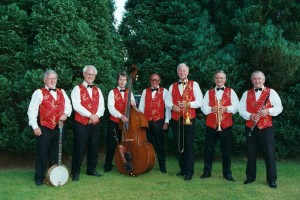