We had a good turn-out for the ‘LORD NAPIER HOT SHOTS’, who entertained us here at FARNBOROUGH JAZZ CLUB on Friday 29th July 2016.  The boys in the band  were band leader MIKE JACKSON on trumpet &vocals, MIKE DUCKWORTH on trombone, PAT GLOVER on reeds &vocals, JOHN STUART on banjo & guitar, MICK SCRIVEN on double bass, bass sax &vocals, plus BILL TRAXLER on drums. 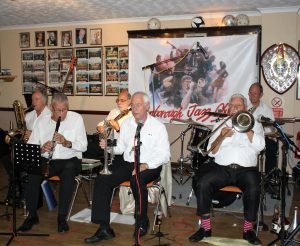 Last week, I said these guys have played together for so many years, obviously showing they have a feel for their music – good old traditional jazz to dance and drink to.  So you obviously all agreed with me and some of you even turned up before we had set up – lovely enthusiasm thanks.  Here’s how the evening went.  They began with a happy little number called ‘All I Do Is Dream Of You’.  I remember Gene Kelly singing this one and was surprised to read that the film negatives of ‘Singing in the Rain’ were destroyed in a studio fire in 1978, although prints of the film survived, thank goodness, it is one of my all-time favourites.  I missed making notes for the next few numbers, with people arriving – even wrote ‘Chris’ sang a song (but missed writing the name of the song) and they didn’t have a Chris in the band –ha (they’re coming to take me away soon!) Oh yes Chris was in the audience!!!! 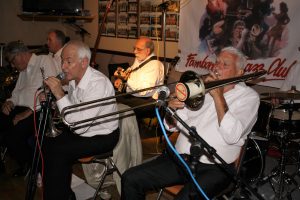 Anyway, I did write Mike (J) sang ‘I’m Sorry I Made You Cry’, a tune that hasn’t been played here before and he sang it beautifully.  Then came a good old trad’ number ‘Royal Garden Blues’ and on came the dancers.  Not only did we enjoy it, but you could hear they enjoyed playing it too.  We were back on the dance floor with our ‘Farnborough Charleston Line-dancers’ to the ‘Charleston’ and do we have fun – not sure if anyone finds us in their way – view-wise, ha! 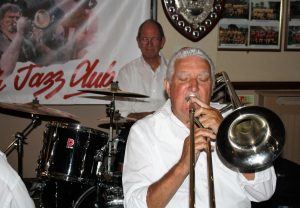 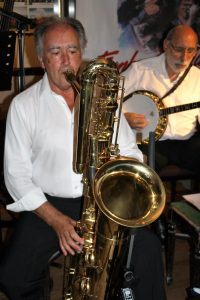 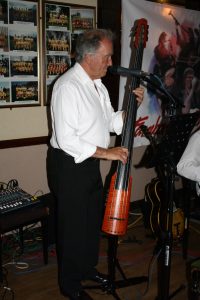 I jotted down that Mick played big bertha (bass sax) – fabulous.  I gave my usual three ticks to the next number ‘Lou-i-Easy-An-I-A’, which meant they all did a lovely job with playing.  It is another happy jaunty number, so again plenty of dancing.  The next tune, ‘Hello Central, Give Me Dr Jazz’, must have had the dancers up too, including me because I didn’t write anything, except Mick sang and I recall he also has a great jazz voice!  ‘Let Me Call You Sweetheart’ was another tune with three ticks, but I think I was enjoying myself, I forgot to write anything (Cinzano time, I think – ha).  Then came ‘Somebody Loves Me’ and was sung by Pat who, as I have said before, has a very romantic voice and I had put my three ticks.  Lovely, because again he sang the last number, being that Fat’s Waller’s number ‘You Meet The Nicest People In Your Dreams’.  Oh, yes, congratulations Pam and Pat, on becoming great-grandparents again by two separate daughter-in-laws.  One born lunchtime Wednesday, the other early Thursday morning! That makes eight great-grand and nineteen grandchildren altogether, wow (congrats too, to Christine, who also had a great-grandchild).