MAHOGANY HALL STOMPERS, was our band who entertain us at FARNBOROUGH JAZZ CLUB (Kent) on Friday 20th May 2016.   Band leader, BRIAN GILES (cornet) had a couple of changes to his band, namely TONY TEALE on reeds and COLIN GRAHAM on trombone.  He had his usual ‘engine boys’ – ‘SOUTHEND BOB’ ALBUTT on banjo and vocals, CHRIS MARCHANT on drums and ROGER CURPHEY and double bass.  But we had a lovely extra surprise, because TIM HUSKISSON couldn’t play with the band due to a previous engagement, but which was then cancelled and thus being free, kindly offered to join the band on piano, instead of his usual clarinet with them.  So we had a seven-piece band, which made for some lovely music by these combined musicians. 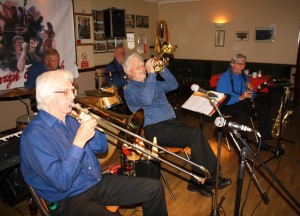 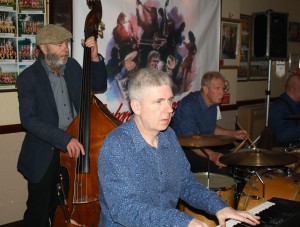 The first number (aptly chosen) was a ‘Louis’ number, ‘Mahogany Hall Stomp’.  However, with people turning up, I didn’t have time to write any special notes, but I did write all dancers were out on the floor for Bix Beiderbecke’s number, ‘That Dah Dah Strain’.  That was followed by ‘I’ve Gotta Feeling I’m Falling’.  Tony took to tenor sax and what was special, was Brian playing trumpet in a duet with Roger, on double bass (both brilliant). 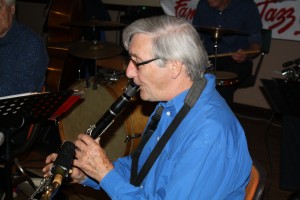 This was followed by a lovely dancing number, ‘Kid’ Ory’s ‘South’, with super trombone playing from Colin (Tony chose to play clarinet).  I just love Bob’s deep, deep voice and he sang a good old favourite tune next, being ‘There’s An Old Spinning Wheel’, also a lovely tempo for dancing too.  So too the next number ‘Singin’ The Blues, Till My Daddy Comes Home’ – bringing on a lot of dancers, all having fun! 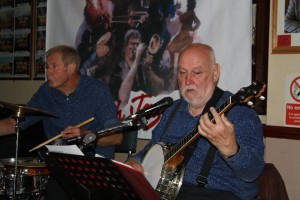 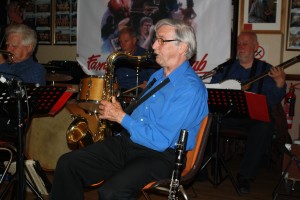 Another tune to mention is ‘Pretty Baby’.  We certainly had some pretty music, with some great solos from everyone – especially Tim on piano and Chris on drums plus of course, sung by Bob.  The evening had some pretty special people turning up too, one such family being Colin Dobson, his wife Jo and accompanied by son-in-law, Jim.  So the band played ‘Somebody Stole My Gal’ (sung by Bob) especially in recognition of Colin and his days on trumpet in the ‘Billy Cotton Band Show’.  The number was their signature tune – see ‘You Tube: https://www.youtube.com/watch?v=i-mgZm-E8wo   (you can see ten-minutes of one of the shows in 1964). 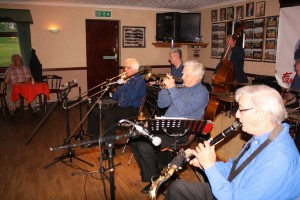 Our other special visitors were Penny (daughter of George Web) and Peter (with friends Valerie and Tony from France) and they all enjoyed dancing, lovely to see them.   I was dancing to the next ‘Copenhagen’, so no little notes, I just enjoyed!   We also had our visiting dancers, Linda and John, who enjoyed (nice to see them as they travel far).  Their closing number was a rip-roaring one to end another happy evening (Keith danced again too – Joyful!) the number – ‘When the Midnight Choo Choo Leaves for Alabam’.       P.S, comment from Mike Witt:  “This band really gelled. Magnifique!. Pix follow”