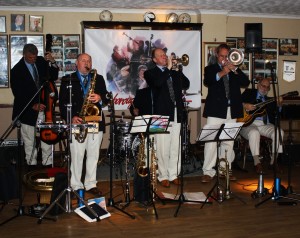 To advertise the evening, I mentioned this band has always excited everyone and certainly lures everyone onto the dance floor.  However, a few of our dancers were absent, due to holidays etc., (their mum’s letters were obtained, but they forgot to bring them last week!).  Thus, we had less dancers to help with our atmosphere.  The band had a hard job playing without that atmosphere, but after a while, they relaxed and by the later part of the evening, we ‘got going’.  My first number to mention was not their first, but Rob told us a super bit of information.  The tune was ‘Buddy Bolden’s Blues’, fabulously played.  The info was about a little known show in New York about Buddy Bolden.  He had played trombone in the accompanying orchestra.  What a marvellous addition to his C.V. 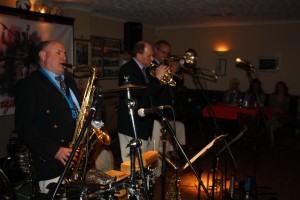 We had a few dancers on for ‘St. Louis Blues’.  I had put three ticks beside this number and again, against the next one too.  It was ‘Blue Moon’ and Leigh sang it rather beautifully (including me – probably not so beautifully – at the back of the room, because I love it!). 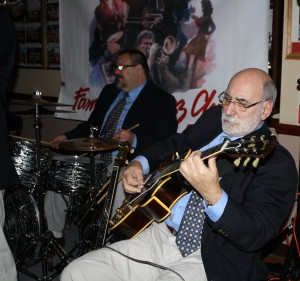 John Stewart on guitar and Paul Baker on drums with Mardi Gras Jazzband at Farnborough Jazz Club (Kent) on 13th May 2016. Photo by Mike Witt. 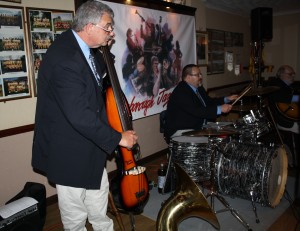 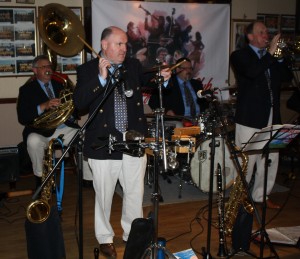 John Ellmer plays blocks&cymbals with Paul Baker on drums and Marc Easener on plus Leigh Henson on trumpet for Mardi Gras JazzBand at Farnborough Jazz Club (Kent) on 13th May 2016. Photo by Mike Witt.

During the evenings  last session, Leigh sang ‘Doctor Jazz’, which had John not only playing clarinet, but also cymbals and bar, great fun.  As if three ticks show how good the number was played, I put five against the next one, because they were all absolutely fabulous with ‘Do You Know What It Means to Miss New Orleans’, plus another brilliant voice – John this time.  Then Rob was able to show his talent with ‘Ory’s Creole Trombone’, an excellent performance and (I think) a coda better than Kid Ory’s – ha (up and down the scales spectacularly – I cannot explain it better than that).  I thought he couldn’t get as good as that, but I was wrong. 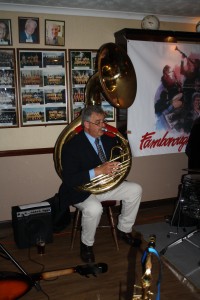 Next, Rob and Marc played some brilliant harmonizing between them on trombone and sousaphone as an intro to ‘Lou-i-Easy-An-I-A’.  A great favourite, sung by John and a real ‘hot’ number played superbly by the ‘engine boys’, Marc, Paul and John (S) .  Then Rob called a friend, Barry Vegas, up to sing.  He was lovely, singing some of my favourite numbers, ‘It Had To Be You’ and ‘A Foggy Day In London Town’, which blended into ‘You’re Nobody, Till Somebody Loves You’.  Plenty of dancing (including Keith asking me to dance! Yes, I mean it – he’s getting romantic again – ha).  My last number to mention is a ‘Louis’ one, ‘The Georgia Grind’, so much fun, with Leigh singing and lots of dancing.  It’s a shame people are shy to get up a dance, until someone gets up first.  We don’t look or judge anyone dancing, we are all different and we are not ‘Strictly Come Dancing’, it is just fun to dance and gives some exercise perhaps needed too.  Thanks Mardi Gras, I hope you enjoyed your gig in the grounds at Westminster Abbey on Monday (16th) playing in a marque – for 500 Canadians, I bet they loved you.  See you next month – 24th June.

‘Keep on jazzing to ‘live’ music with

‘You’re Nobody till Somebody Loves You’ – Russ Morgan, Larry Stock, and James Cavanaugh (1944)