The SUSSEX JAZZ KINGS appeared at Farnborough Jazz Club on 29th April 2016 and some super jazz, along with dancing and laughter were in evidence.  Leader, DAVE STRADWICK, trumpet, had booked his regular players, IAIN MCAULAY on trombone, BERNARD STUTT on clarinet, PHIL DURELL on banjo, PETER CLANCY on d.bass &sousaphone and PETE LAY on drums.  I had suggested you get your butts down to ‘Farnborough Friday’ and get swinging, but forgot it was May Bank Holiday weekend, so many of you obviously had family commitments, although we still had a nice little crowd and another evening was enjoyed.

They started ‘right in’ with that happy jaunty tune, ‘Algiers Strut’.  Welcome back boys.  They followed on with a super Duke Ellington number, ‘Saratoga Swing’, with some wonderful solos played by everyone.  Dave remarked we had cheated doing our line-dance to the next one.  He had already stated that as we are getting older (what?), he doubted we would be able to dance to it – or if even the band could play it, but we all coped well (band too, ha) with ‘Isle of Capri’, made famous by Ken Colyer.  I have to say, us line-dancers were breathing fast on returning to our seats (who said that!!!!!!)  Now I have another beautiful voice to mention, this being Iain’s.  He sang one of Fats Waller’s numbers, ‘Everybody Loves My Baby’ and what a super job he made of it.

My next mention is of Pete’s feature on Sousaphone.  What a lovely instrument and he played it splendidly to ‘Big Butter and Egg Man’.  Although a lovely one to dance to, we held back and listened instead.   The next tune was such a romantic one, ‘The Miller’s Daughter, Marianne’, sung by Iain so beautifully too.  (Just a little bit of extra info, this song must surely have been written for the daughter of Sir Thomas Miller, 6th Baronet of Froyle, Hampshire, although she died in 1910 and the song was written much later in 1936.  If I am right, I’m sure she must have been involved with the composers and left a lasting impression on them in some way, anybody know?  It is a shame our own Marianne was not at the club (bank holiday commitments), but I will tell her about the number!

Bernard was featured next with a special tune ‘If we never meet again’, such a lovely tune and sung by Pete (C), who also has another great jazz voice.  The tune was made famous by Elvis.  Oh yes Dave, what a great feature came next and it was yours (Iain said you had decided to play it especially for Farnborough!)  Well Dave, I think you played it even faster than Humphrey – loved him and loved you!  The number?  ‘Bad Penny Blues’ of course, superbly backed by your own engine boys, Pete (C), Pete (L) and Phil, fantastic.

It was Phil’s turn to be featured and he played ‘Mabel’s Dreams’.  Thanks Phil, you did it a treat.  (I have to confess, I know a huge amount of  tunes, but I’m sure like many of you, I don’t know too many titles!  Thanks to Mick Collins, who sits near to me, I am able to double check with him of a name!)  Finally, Dave made a special mention to his lovely wife, Lesley.  He said she works extremely hard sorting gigs for them etc., and he dedicated their last number to her (renaming it accordingly), ‘My Wild Reigate Rose’ – nice this photo captured her too.  Well done Lesley – where would men be without their ladies?  Once again, thanks to the ‘Kings’, it was nice to have you back at Farnborough.

Following photo – pinched from their own website – Sussex Jazz Kings. 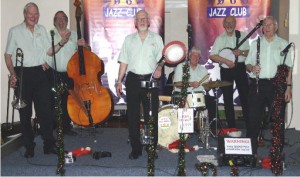