MIKE BARRY’S UPTOWN GANG played on Friday, 8th April 2016 here at the Farnborough Jazz Club (Kent).  MIKE BARRY (leader, trumpeter & vocals) had his usual band with him, namely GOFF DUBBER on reeds, ‘WHISPERING’ MIKE HOLT on trombone & vocals, JOHN STUART on banjo & guitar, ROGER CURPHY on double bass and GRAHAM COLLICOTT on drums.  The week prior, I advertised the evening by saying Mike is a wonderful band leader and this bunch of guys together will be for great entertainment, of that you can be sure.  They didn’t let me down.  I also said ‘Whispering Mike’ is such a funny guy, so him just on his own, would give you a warm happy glow inside you on leaving the club.   I added that together they would have you in peals of laughter throughout the evening, plus you would certainly love the music they produced!  Again, I wasn’t wrong.  Almost a full house can verify this (nice to see Mary and Bob back from Australia – with Beverley, a pretty young Japanese friend with them). 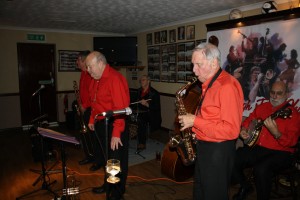 The band’s repertoire started with a couple of fast numbers and then, my first number to mention (sung by Mike, with Goff on alto sax) is ‘Beale Street Mama’, ‘Louis Armstrong’s version and just such a cool number. 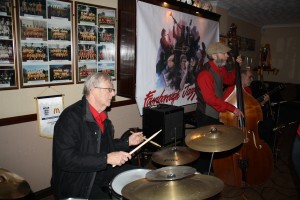 They all showed off their ‘stuff’ with my next choice ‘Kid’ Ory’s ‘Creole Song’.  Fabulous solos from everyone, showing that the ‘engine’ doesn’t just drive a band, but can hold their own, when playing solo – luverly!  We chose to dance our ‘Charlton style’ line-dance to Bix Beiderbecke’s ‘Oh Baby’, obviously, I was too busy to make notes – certainly fun for us dancing – ha. 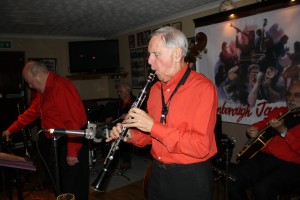 I loved Goff singing next (in true ‘Louis Armstrong’ style) to ‘Do You Know What It Means To Miss New Orleans’.  They played it beautifully and brought everyone onto the dance floor (such a romantic lot).  Next they played a wonderful rendition of ‘Everybody Loves Friday Night’.  Oh what a certainly fun for us dancing – ha.   Oh what a marvelous bit of fun and with everyone in the audience joining in singing at the top of their voices.  Yes, really, oh, what was that?  Yes, you’re right, it was actually ‘Everybody Loves Saturday Night’ – ha.  Then came a brilliant swinging number ‘Clarinet Marmalade’, fabulous. 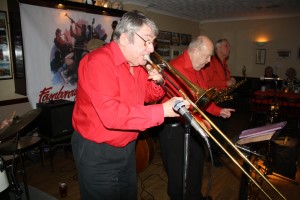 ‘Whispering Mike’ had everyone in fits of laughter with his party piece, singing to ‘March Dominique’.  He sings it in pigeon French (complete with beret).  Oh he is wonderful.  I had a hard time finding who wrote this tune, only finding ‘Dominique’- Jeannine Deckers’ (‘Sister Smile’ or ‘The Singing Nun’) tune, not believing it could be this tune, being a Nun.  But if I had listened to it on You Tube, I would have realised it was the same tune.  However, Mike shows his wonderful talent, because he added a New Orleans ‘marching’ touch to it and hence a fantastic result.  His talent didn’t end there, because the following tune was his own composition.  He took the idea from pianists, during the Great Depression of 1929, who (unable to get band work) took individual jobs and to jazz things up, ‘Boogie’ was invented.  Mike wrote this tune and called it ‘Bluin’ the Eighths’ (musicians will understand how and what that means).  I absolutely loved the result and strongly believe Mike should record it – it was super. 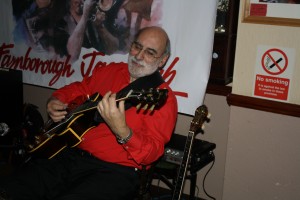 Before I mention my last number, I want to point out how most musicians suffer aches and pains in silence, playing their hearts out.  One such person is  John Stewart (capture here by Mike Witt)  was suffering with severe back pain, but this photo doesn’t show a note of this (the only notes he showed were musical ones!).  Well done John.  Plus cannot leave out this photo of our loveable Roger. 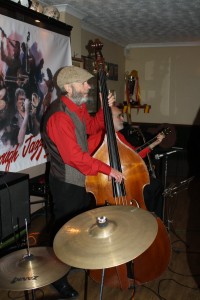 They finished up in style with ‘Bourbon Street Parade’ a splendid way to go home – wow!  I need say no more  ……. just brilliant!

Eight 430-tonne electrical transformers to descend on Dartford Crossing.  Go to ‘Page’ above for more information.