BOB DWYER’S BIX & PIECES were back here at our FARNBOROUGH JAZZ CLUB on Friday, 18th March 2016.  Leader and trombonist BOB DWYER, chose to have join him, BERNIE HOLDEN on clarinet & alto sax, HUGH CROZIER on piano & vocals, JOHN BAYNE on double bass & bass sax and DAVE PRICE on banjo & guitar, TONY O’SULLIVAN was on trumpet and CHRIS WELCH was on drums.  Both Tony and Chris had played at the club before (Tony some ten years back with the Delta Jazz Band). 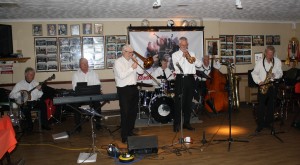 Here are a few notes about the music.  My first mention is of ‘Barefoot Boy’.  It was sung by Bob and had a wonderful easy-going tempo for everyone to dance to and, I’m sure, to play too, because they all gave some lovely solos. 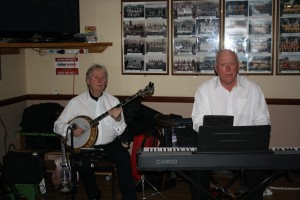 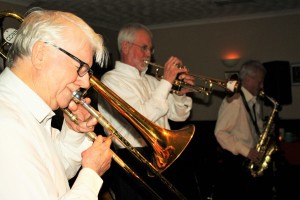 Hugh played a beautiful intro and then sang the next one, ‘2:19 Blues’ (also known as ‘Mamie’s Blues’).  Hugh very rarely chooses the same number, but I understand this is a favourite of his.  [He also tells me that although it is credited to Jelly Roll Morton, Jelly Roll himself is said to have told it was composed by Mamie Desdumes, who was a prostitute friend of his godmother – ahem].  Onwards … ‘Fidgety Feet’ was the number we chose for our line-dance – wow, we are gluttons for punishment, well it is a great number – but fast aye – there were some fabulous solos played by everyone.  Hugh sang the next, ‘Thou Swell’, again some brilliant playing by everyone, with John on bass sax and Bernie on alto sax.  ‘June Night’ was then sung by Bob.  A number I certainly remember from the 50’s (obviously from Tommy Dorsey’s recording), but I don’t recall this one having been played at the club before.  It is certainly a lovely number. 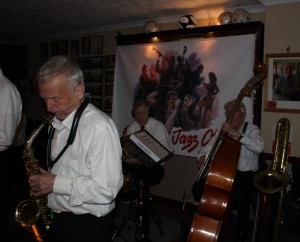 We had some new people, who hadn’t heard John play his special, so again I requested him play ‘Elephant Stomp’.  I‘m sure no-one finds it boring, just about everyone loves it.  I always hear people say they are amazed how John can have the lungs to cope – he’s not much more than 5’ 5’ and not 18 anymore either!  You are brilliant John.  Next came ‘Royal Garden Blues’ (a Fox Trot), quite a favourite with traditional jazz lovers, as is the following number and oh, another lovely singer too! Tony that is.  He sang ‘Tishomingo Blues’.  Bob again sang ‘Nice To Know You Care’ for Keith and me and it had the dance floor full – romantic yes?  Tony and Chris played marvellously too, wonderful considering they hadn’t played it before.  Their finishing number was ‘Panama Rag’ (Bernie on alto) what a number to go out on – such an exciting one.  Again thanks for a lovely evening. 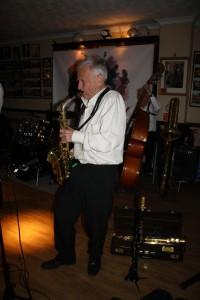 N.B.  Chris is a music journalist, reviewer and critic with Melody Maker, plus he and Geoff Nichols co-wrote the book entitled ‘John Bonham: A Thunder of Drums’, available from Amazon’s Book Store – ISBN: 0073999308563,