We had the  ‘LORD NAPIER HOT SHOTS’ on Friday 26th February 2016, here at FARNBOROUGH JAZZ CLUB.  Let me remind you, they have been playing at the Lord Napier Pub in Thornton Heath for many, many years now, which shows how well loved they are.  I mentioned last time, this pub has been one of London’s most favourite jazz venues since the early 1960’s.  Leader, MIKE JACKSON (trumpet), had booked MIKE DUCKWORTH (trombone), PAT GLOVER (reeds & vocals), LYNN SAUNDERS (banjo & vocals), MICK SCRIVEN (double bass,  bass sax & vocals) and BILL TRAXLER (drums). 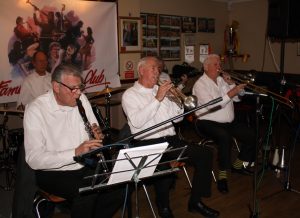 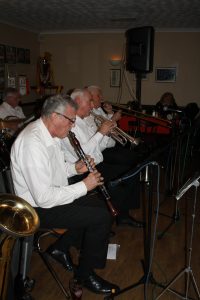 Once again, you all asked for us to get them back as they play such lovely happy trad jazz and their first number didn’t disappoint anyone, being ‘Down In Honky Tonk Town’.  Mike (J) sang it for us (rather nicely, as well as super trumpet) and Mike (D) blowing a great ‘bone too.  My next mention is ‘Blues My Naughty Sweetie Gives To Me’, with Pat giving us a turn with his vocals and can he sing this fast.  Keith and I go back a long way with Pat and have always loved his vocals, playing (and whistling, when he could do it).  Our turn for a line-dance comes next on my list, that being to the ‘Charleston’ – not too many of us, but doesn’t matter, because their playing was ‘fab’.  Great drumming Bill. 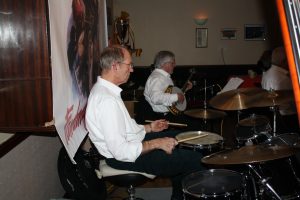 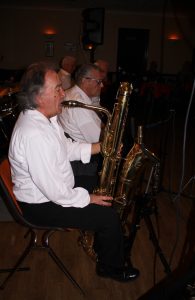 Now you all know I just love a bass sax (which a long time ago, I nicknamed ‘Big Bertha’).  Well my next choice of number, I noted Mick chose to play his bass sax to, which was ‘At Sundown’.  What a wonderful Artie Shaw number and how fantastically played by everyone.  Mick stayed on ‘Big Bertha’ with their following tune, being Bix Beiderbecke’s famed number, ‘Royal Garden Blues’.  Yes, here I had given those three ‘ticks’ in my notes.  Then I have to make mention to ‘Mama Inez’, a rhumba, although Steve and I probably performed a mambo – oh well!  I just love the Cuban and Latin American dances. 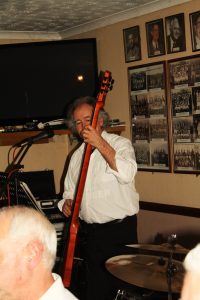 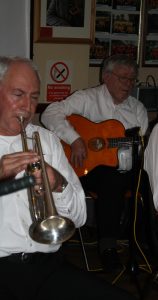 The next number was a feature of Lynn’s and that was ‘When The Midnight Choo Choo Leaves For Alabam’.  Of course he sang it as well as playing banjo and does he excel in both.  Keith and I go back a long way with Lynn too, so I just love him.  I must include the next tune, ‘Dream A Little Dream Of Me’, because Mike (J) played a lovely trumpet.  This song is such a beautiful song and if you go ‘on line’, you will find a recording of it by Doris Day, looking and singing possibly at her very best.  Mick sang their last number, ‘Porter’s Love Song to a Chamber Maid’.  Gosh another marvellous singer, aye!  Such a lovely evening.  Hope you all enjoyed it and hopefully we’ll see you next week.