MARDI GRAS JAZZBAND!  This was the band who had the tough job of following on from our two special Friday celebrations.  Well, I said they would certainly be able to fill that role and I told you that should you not believe me, then you must turn up and see/hear for yourselves.  That was Friday, 21st August 2015.  You all knew it was here at our Farnborough Jazz Club (Kent), because you did turn up.   The band’s leader, trombonist ROB PEARCE, was joined as usual, by LEIGH HENSON on trumpet &vocals, JOHN ELLMER on reeds (John played drums here last week), TIM HUSKISSON on piano, BRIAN BELL on drums and DAVE SILK on double bass &tuba.  I reminded you of the last couple of times they played for us, how you didn’t want them to end, so they were certainly back again by popular demand.  How do I tell you just how great they were, well you really should be here on nights like this. 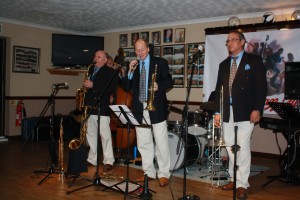 Ok, here goes … the first number was sung by Rob and was ‘If I had You’, with John giving a touch of ‘007’ flavour to it – smashing.  Leigh sang ‘I’ve Gotta Right To Sing the Blues’ and yes – he’s got a great voice too.  My next starter for ten ‘Don’t Get Around Much Anymore’ was wonderful.  John played tenor sax and how they all excelled. 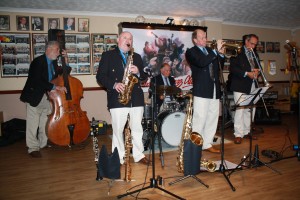 The next number I wish to comment on was that Duke Ellington number ‘It Don’t Mean a Thing (If You Aint Got that Swing)’, was sung by Leigh.   Oh, it was just brilliant.  I had written ‘great trumpet, great bass and great drums’ – well, they were all fabulous, but I’m getting so repetitive – sorry, can’t help it!  Then we come to a Louis number, ‘Swing that Music’, oh boy, oh boy, great stuff.  We performed our line dance to my next choice ‘Some Of These Days’, a lovely samba.  Then snakes alive, Keith actually asked me to dance and he was fabulous too – ha.  The dance? To ‘Panama Rag’, wonderful.  My last mention must be ‘Frim Fram Sauce’ of Nat King Cole fame.  I don’t recall it having been played here before and just loved it (but then I am a Nat King Cole fan, big time).

Mardi Gras, we just love you and love seeing you enjoy playing together.  Bookings will be on-going, we hope.  See you back here 20th November 2015.