PHOENIX DIXIELAND JAZZ BAND played for us at the Farnborough Jazz Club on 23rd October 2015..  The band is usually led by ROBIN COOMBS, but Robin, who was here tonight (with his wife Pauline) and thankfully recovering from what was a very serious illness (flown home by emergency jet from Cuba).  However, CHARLES SHERWOOD replaced him on clarinet, alto and tenor sax.  PAUL HIGGS was on trumpet, BILL TODD on trombone, DAVE BARNES on piano, ROGER CURPHEY on double bass, JOHN STUART on banjo & guitar and ALAN CLARKE on drums. 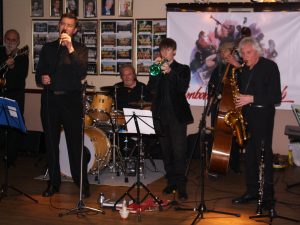 The band was obviously suffering with shock, yet you would not have guessed by the evening’s entertainment.  ‘Struttin’ With Some Barbecue’ – what a number to start the evening off with – even being a Louis Armstrong hit, Paul was marvellous on trumpeter and certainly entertained us.  The whole band were great, as with their next tune, ‘Wabash Blues’, we had the dancers out in full.  It was such a great jaunty number and mid-tempo, so good fun.  But the next number I will mention was the opposite, being fast number, with no dancers at all, we just listened to their brilliant playing to ‘I Found A New Baby’ – wow, so enjoyable, with a superb drum solo (all brilliant solos actually). 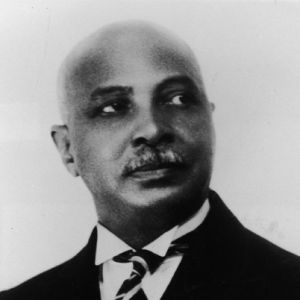 The next tune has quite a story attached to it.  One I’ve already told to you a couple of years ago, but is worth another mention.  It is about Dave, who is somewhat of a composer. 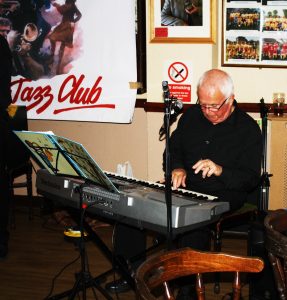 A number of years ago, Dave met up with an old friend, Ian Grant, who was the lyricist of ‘Let There Be Love’ (1940).  He showed Dave some lyrics he’d written fifty years before, called ‘We’re Handing it to You Mr Handy, for Handing us the St. Louis Blues’, (referring to W.C. Handy, composer of St. Louis Blues.)  Ian asked Dave if he could put some music to it.  The end result is they played it for us and AGAIN, I wished I had recorded it. It had a lovely beat and certainly packed the dance floor again. I might be back to add a photo of Ian (if Dave can find one). 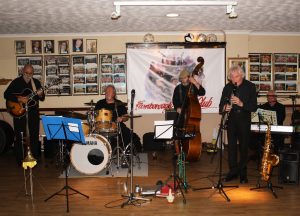 The next one was a special feature for Charles, ‘Strangers On The Shore’ and what a wonderful job he made of it – certainly tons of applause too.  ‘Chinatown, My Chinatown’ is another number I love to hear and they all played terrific solos.  They changed key on their last chorus (and I remember John and Dave somehow played a chimes chorus). 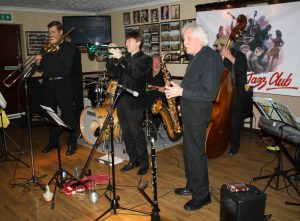 Paul featured next with his lovely iridescence green trumpet and super-duper he was with ‘Stardust’. It is a beautiful song and Paul plays with such feeling, so of course, brilliant to listen to.  We performed our ‘Charleston style line-dance to their next tune, ‘At The Jazz Band Ball’.  Certainly a fast one, so we were quite exhausted at the end, goodness how the musicians felt – ha. My last number to mention is ‘S’Wonderful’.  Charles played tenor sax (such a lovely player), with Dave singing and must mention Alan on drums and our Roger on double bass – they have a lovely rapport. 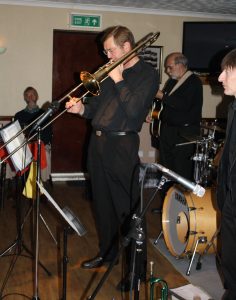 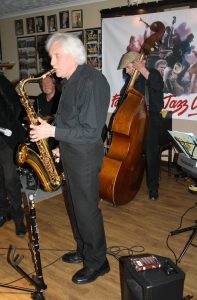 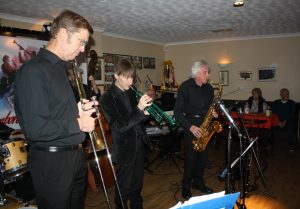 Just have to finish up, with wishing Robin absolutely everyone’s huge special wishes for his continued recovery and also our thanks for giving us Charles as his replacement.