‘BILL PHELAN’S MUSKRAT RAMBLERS’ made a return journey to our FARNBOROUGH JAZZ CLUB on Friday, 2nd October 2015. It was exactly a year ago they were exciting us (see back to that newsletter).   You were all having such fun and screaming for more at the end of that evening, likewise the same this time.  Band leader, BILL PHELAN (trumpet & flugelhorn) had joining him ALAN CRESSWELL (clarinet), along with JOHN FINCH (trombone/vocals),  ANDY LAWRENCE (double bass), JIM HEATH (banjo/vocals) and PAUL NORMAN (drums).  I said last week, all the more reason for joining us – being you called out for more last time!  Well, our audience was a little thin on the ground, but that didn’t deter this lovely band from playing their hearts out. 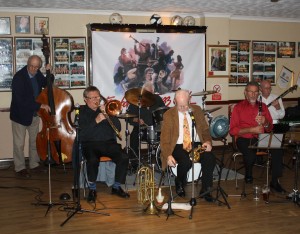 Those who came, enjoyed every minute, because the band played many favourite tunes.   Bix Beiderbecke’s ‘Royal Garden Blues’ for one, with some great trumpet and clarinet playing from Bill and Alan.  We performed our line-dance to Alan’s fabulous clarinet notes and ‘Hiawatha Rag’ – we were exhausted afterwards, ha!  Then we continued dancing with the band’s rendition of ‘Magnolia’s Wedding Day’ – as we were still on the dance floor. 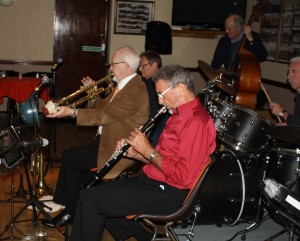 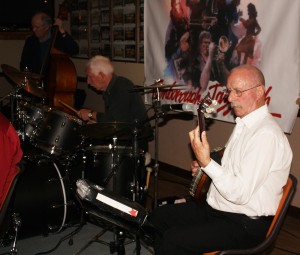 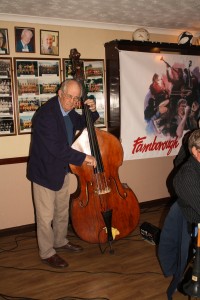 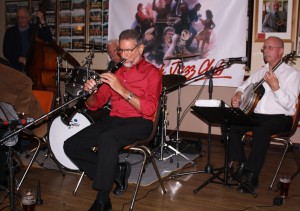 Then Alan was featured next to George Lewis’ composition of ‘St Phillips Street Breakdown’ (George renamed it ‘Burgundy Street Blues’).  Lovely job Alan.  Their next tune chosen was ‘Ciribiribin’, to which I have a special warm feeling about, having written to one of the composers, Jack Lawrence.  Bill played it beautifully.

Their next tune they dedicated to me, hmmm, the number was ‘Dinah’, sung by Jim – thanks Jim.  My next choice to mention is Louis’ ‘That’s My Home’, such a lovely tune and I had put three ticks against it, which meant everyone excelled playing it. 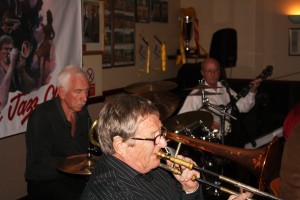 We were up with a line-dance again to the next tune, ‘Move The Body Over’, sung by John (another great singer of the band), such a ton of fun again.  Their last number of the evening was ‘Buena Sera’, yes a lovely up-tempo number to ‘go out’ on.  Thanks for entertaining us so wonderfully boys – lovely jubbly

P.S.  I wrote the following, when I advertise this week’s gig, so still wish to include it:  “You probably will have read it was the first time last year for ‘Strictly Come Dancing’.  Yes and here I am moaning.  I watched once more to my horror, either the Band, or the Producers have chosen the wrong music again.  The very first number of the competition, was for a Tango – what did they use for the music? Namely THE KINKS “You Really Got Me Now” – not even a real tango beat AND IT’s NOT EVEN A POP NUMBER NOW!  I so want to watch the programme, but I fear I shall have to give it up!  (Oh, I know… I won’t though, but see you this Friday, for some real music.