It was MIKE BARRY’S UPTOWN GANG who played again for us on Friday, 24th April 2015 here at the Farnborough Jazz Club (Kent). MIKE BARRY (leader, trumpeter & vocals) was joined by GOFF DUBBER on reeds, ‘WHISPERING’ MICK HOLT on trombone & vocals, GRAHAM BARTON on piano, ROGER CURPHY on bass and GRAHAM COLLICOTT on drums. They were on top form as ever. It is a great shame, Mike Witt took some photos on a small camera, but none came out successfully, all but one, that is. Quite eggstraordinary really, because Val (behind our bar) brings us wonderful freshly laid eggs and this week, she brought a huge goose egg. I asked Mike to take a picture of it – yes you guessed, this one came out (well it was an egg ha). What is eggtraordinary is the news this morning on BBCTV showed a special pre-historic egg – one of a 500yr old Madagascan elephant bird which is to be auction at Christies – coincidence I know! See it on: 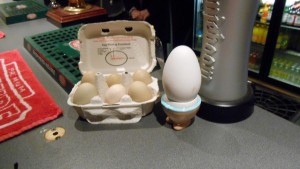 Photo of Val’s special fresh goose egg brought in to Farnborough Jazz Club (the night of Mike Barry’s Uptown Gang) on 23rd April 2015. We thought it was a wopper!. Photo by Mike Witt.

Back to Mike Barry’s Uptown Gang, my first choice of song to mention was sung by Mike, ‘Blow My Baby Back To Me’ and on came the dancers immediately. I jotted down great solo trombone from ‘Whispering’ Mike. Next came Stan Kenton’s hit ‘Harlem Folk Dance’, with absolutely brilliant playing by all of them, in particular, fabulous playing from Roger on bass and Graham (C) on drums. About a dozen of us managed to dance our line-dance to a Latin American rhythm. The tune was ‘Brown Skinned Girl’, great fun, thanks boys, you played it fabulously for us. Then Goff sang ‘Saving All My Love For You’. So many musicians have great jazz voices, as he has. Did you choose to sing this song because of the composer (could he be a relative Goff?) ‘My Monday’s Date’ followed on with Goff on tenor sax and fab bass from Roger (I noticed an interjection from you of ‘Fascinating Rhythm’ – see these little things don’t go unnoticed – ha). Graham was featured next and performed his own Boogie composition (obviously named ‘Graham’s Boogie’) which he played last time they were with us. Mike told me then, Graham composed it that night? Next came ‘Whispering’ Mike, singing (as well as performing a super bit of trombone playing) to ‘Wrap Your Troubles in Dreams’, (a Bing Crosby hit) to which Graham (B) also performed a great piano solo to. We did a second line-dance to ‘I Found A New Baby’, well they were playing it brilliantly.  What happened next, shows how much relaxed fun occurs at jazz evenings. Mike hiccupped at the beginning of his intro with ‘Bugle Boy March’ – hiccupped? Well, he couldn’t get it right and so took a couple of stabs at it, with so much heckling from us audience in his ears. Then after another re-try, got it perfect to a huge cheer – lovely bit of fun – that’s jazz. Mike is back again on 26th June with his Yerba Buena Celebration Band, so put it in your diaries.