They began their repertoire straight in with ‘Big Better and Egg Man’ (which was written for Louis Armstrong) and was played with such excitement. Rob then explained I had spelt his name wrong, so wanted to sing especially for me ‘Dinah’, sung by Leigh, ha. What dry humour, quite piercing of course Rob!! They played Benny Goodman’s hit number next, ‘Clarinet Marmalade’ (John played the wood bar and bongos drums). What a brilliant number and I just loved it. Next was a great Peggy Lee number ‘Lady is a Tramp’, sung by Leigh, who has a super voice. Such a difference to the last number and again another change to the following one, ’Rocking’ Chair’, sang by John – another great voice too. 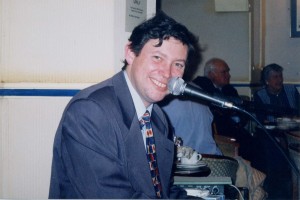 Steve Morgans (pianist) a member of Mardi Gras Jazz Band until he died back in 2001 (aged 37yrs).

‘When I take My Sugar to Tea’, was dedicated to pianist Steve Morgans, who died in 2001 at the young age of 37yrs. John used alto sax, Roger tuba and Leigh sang, such a lovely tribute. Brian began the next number with a dazzling bit of solo drumming to ‘It Don’t Mean a Thing (If You Ain’t got that Swing)’. Rob was tremendous on trombone, Leigh terrific on trumpet, Tim perfect on piano, John played brilliant bongos and Roger played beautiful bass, hmmm.   One of my favourite numbers of the evening was ‘Tequila’, John played what the band call his “Fisher Price Play Station” ha. Certainly he is so talented – as most of you know, John is not only a super reed player (playing the clarinet and all the Saxes), but a master at the drums too. Just so exciting and I so wanted to dance, (but no partner at that point).  Mike had a technical hitch with the photographs this week and only managed to send one, although he wasn’t happy with the result of the one, but at least you can see John’s toys. Sorry your cymbal is in front of your face John. Had there been more, I wouldn’t have published this one.   Closing, I must mention last November, you yelled for us to ‘get them back please’. After this week, you have asked for them again. Now you have to wait till 21st August, but the wait, I think you will agree, will be worth it.