The LORD NAPIER HOT SHOTS produced a really happy atmosphere for us on Friday 16th January 2015, here at FARNBOROUGH JAZZ CLUB. The musicians in the band were MIKE JACKSON on trumpet, MIKE DUCKWORTH on trombone, PAT GLOVER on reeds, JOHN STUART on banjo, MICK SCRIVEN on double bass & bass sax and ARTHUR FRYATT on drums. They had been playing lunch time at the Lord Hood in Greenwich, but you would not have believed it as they were all so fresh. 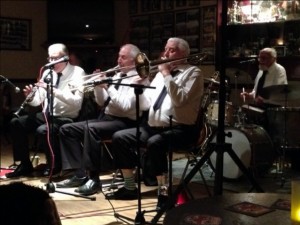 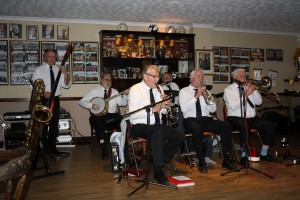 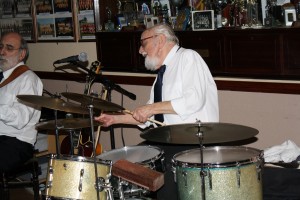 Dear Arthur is now 86 years young, so definitely a ‘one up yours’ to all the government, medical and media bods who are talking about our ‘aged’ generation being a waste of space. Our audience can vouch for this being laughable. A young couple in their 20’s (I think), in our audience had this band for their wedding. Plus, my granddaughter (who is two weeks off her ninth birthday) enjoyed herself too at my birthday celebration evening (the last one for this year-ha). Thanks boys for entertaining me/us with a super assortment of good jazz. Now the difficult job of what to mention and what not to mention, so not to give their complete repertoire away! To begin with, their first number was ‘That Da Da Strain’, a ‘Bob Crosby and his Bobcats’ famed number’ and a fabulous one to start off with. 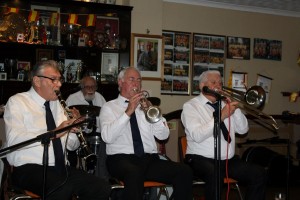 Pat, who has a very pleasant engaging voice, sang the next number, ‘In the Shade of the Old Apple Tree’. Arthur also has a wonderful jazzy voice and sang ‘Just a Little While to Stay Here’ for us. Then a really lovely number I don’t think has been played here before was ‘All Alone by the Telephone’ (both John McCormick and Al Jolson had number 1 hits with this one). Then ‘One Sweet Letter from You’ was another great number and must mention that Arthur gave a marvelous drum solo, although they all performed fabulous solos. Mike (J) then sang ‘Weary Blues’, Mike also has a great voice (phew so many great singers around). 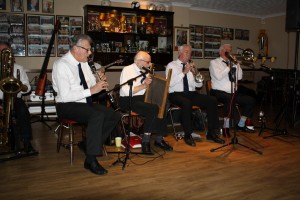 Next, Arthur came up to join the front line and we had a couple of brilliant songs with him performing on washboard (& vocals), one number being ‘Doctor Jazz’. 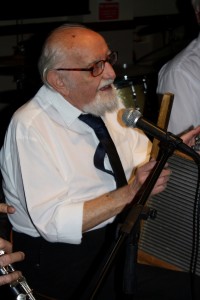 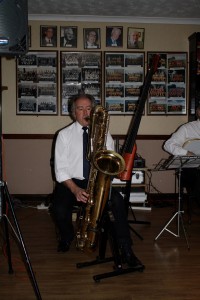 I put couple of asterisks next to the next one, ‘New Orleans Shuffle’. Certainly a fun number, played brilliantly. My next number to note was ‘Cake Walking Babies’ as it was our choice to perform our line-dance to, it has a great tempo – always a little bit of fun. Only five of us this time, as some regulars were away with illness. Then for their closing number, they played that aptly named finale ‘Get out of Here and Go on Home’. 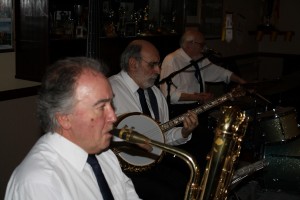 Definitely a return date has to be sorted for later on in the year. We have the Phoenix Dixieland Jazz Band next week, Friday 23rd January 2015. So see you then and here’s reminding you of our new times, 8.00pm till 11.00pm.