TONY PITT’S ALL STARS at the FARNBOROUGH JAZZ CLUB on 21st NOVEMBER 2014 was quite mediocre! Am I kidding? OF COURSE I AM! SPECTACULAR, UNBELIEVABLE, OUTSTANDING – LOST FOR WORDS!  Tony had booked another superb treat for us with none-other-than ROY WILLIAMS on trombone, DENNY ILETT on trumpet, AL NICHOLS on soprano and tenor saxes, TREVOR EVANS on double bass, JOHN ELLMER on drums and of course TONY himself, ‘solid as a rock’ on banjo. 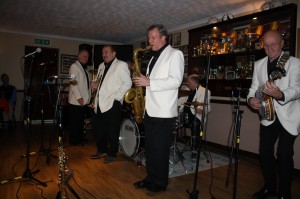 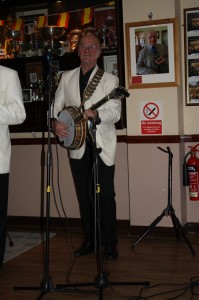 How can I explain that I am not exaggerating either? Whatever I write will not give you the full picture, you had to be there.  A great audience, with such smiling faces, enjoying this wonderful array of top notch musicians. What is so lovely, is the fact they were all unassuming and with none trying to hog the limelight. 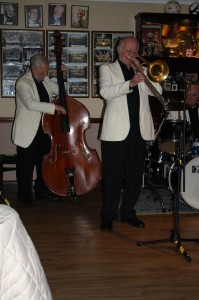 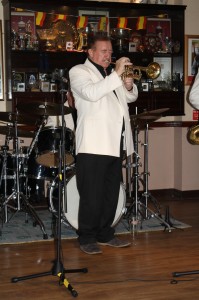 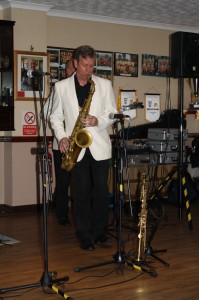 I think I might upset other bands if I go on anymore, so will just tell you what tunes they played. They began with a Jimmy Rogers number ‘Travellin’ Blues’, great one to start.  The next number, ‘Blues My Naughty Sweetie Gives To Me’, I had written down ‘great solo from Al on soprano sax’, but then continued to write ‘oh wowie, great solo from all of them’. 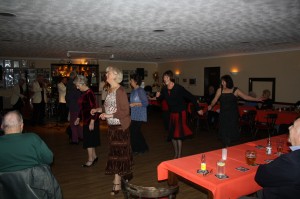 When I Grow Too Old To Dream’ had six of us performing our line-dance. Mike took a photo and I now realise I just have to diet (gulp), but it is Gordon’s fault being ill – not enough dances – thank goodness for Steve. Then what about ‘Basin Street’ – they ‘stormed’ it. The front line were spectacular, being supported brilliantly by the engine ‘boys’ (Al was on tenor). But then they finished the section in the same spirit with ‘South Rampart Street Parade’ – John performed a brilliant drum solo. They changed the mood with Denny singing the next number, ‘You Always Hurt the One You Love’, lovely number. With Tony having introduced the ‘South Rampart St’ number as ‘Bourbon Street Parade’, they decided to play it. Obviously, the audience gave him some stick – ha. I noted Al played soprano sax when they played ‘Indianna (Back Home In)’ and then Denny sang ‘Just a Gigolow’, yet another great jazz voice. Everyone was begging for ‘more’, with no-one leaving the dance floor. So they played on for us, with ‘Everybody Loves My Baby’, which was just wonderful (I think there was an interjection of ‘Mood Indigo’). 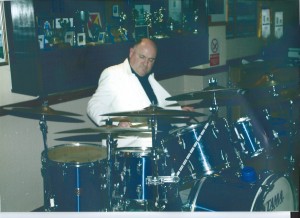 It resulted with them playing well over time and I’m sure it was because they were enjoying themselves just as much as we were listening to them. Another fabulous evening and such a ‘high’ to go home on. By the way, you might wonder why I list composers. I just feel without them, we would not be enjoying our Fridays, so we should not forget them (read on google about Shelly Lee Alley www.shellyleealley.com – very interesting man). We might not have met these composers, but fantastic to meet the musicians who play for us ‘live’! Keep supporting us to enjoy this moment in time. Plus we have more for you to enjoy next Friday too, with Mike Barry’s Uptown Gang.