THE MARDI GRAS JAZZBAND came to Farnborough Jazz Club (Kent) on 7th November 2014 and oh we sure did dance to ‘the Mardi Gras’, just like the song. Those in the band were trombonist and leader, ROB PEARCE, with LEIGH HENSON on trumpet and vocals, JOHN ELLMER on reeds, yes – not his usual drums, he’s brilliant on reeds too. Then there was TIM HUSKISSON on piano (who is also a brilliant reeds player), BRIAN BELL on drums and DAVE SILK on double bass. So a great line-up, don’t you think. Everyone raved about last week’s jazz. Likewise they raved about this week too. 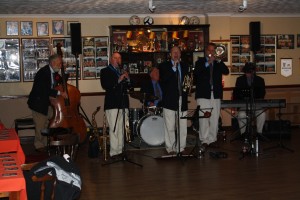 First, let me say how I just love the way most of our bands make an effort to look good with a dress code, not a must, but fabulous when they do and this band looked great, it all adds to the whole picture. This week, they had the dance floor packed to practically every number. I recall one number, I think there was only eight people sitting. What did they play? Well, I missed the first number, with people still arriving. The first one I noted was Leigh singing ‘Sweet Sue’. He has a fabulous voice, quite romantic and it certainly pulled tons of dancers onto the floor. Rob announced John was to sing next. I heckled to John “you won’t get paid if you do”, of course I was joking, John also has a wonderful voice and sang ‘Hello Dolly’. Likewise ‘Do You Know What it means, to Miss New Orleans’ and I jotted down ‘lovely trumpet’. 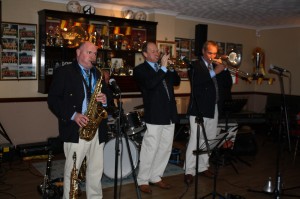 Next came their signature tune ‘At the Mardi Gras’. Keith said it is huge favourite of his. We did our line-dance (about 10 of us this time).   Another number to which I wrote ‘fabulous’ against, was ‘Stevedore Stomp’. Of course a favourite played by lots of bands ‘I Scream, You Scream, We All Scream for Ice Cream’, to which got our line-dancers going again. They then played one of Kenny Ball’s hit numbers, ‘If You Go Down to the Woods Today (Teddy bears Picnic)’ and what a brilliant job they made of it, sounded every bit as good as dear ol’ Kenny. ‘My Satin Doll’ is one of those wonderful ‘standards’ that I love and to finish the evening, they chose to play ‘Aint Misbehaving’. I particularly noted a great drum solo from Brian and also piano solo from Tim, but must say everyone played brilliantly. Of course Rob paid tribute to jazz legend, Acker Bilk, who moved on last week, to join that big jazz band in the Sky. Well, another evening finished with everyone saying “what a lovely band and you must have them again.” 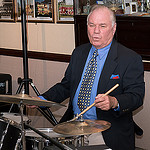 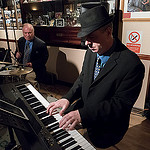 That’s what I say is ‘a good night out’ and is what it is all about. See you next week with ‘Laurie Chescoe’s Re-union Band’

‘At the Mardi Gras’