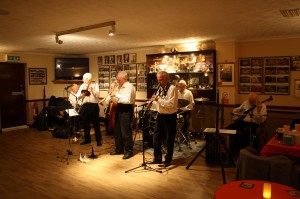 Their first number was rather unusual, as it is usually played by most bands at the end!  ‘Go On Out of Here (and Go On Home)’. Now that shows confidence the audience would not comply, ha.  Next, John played bass sax, or as I call it ‘Big Bertha’ (John said he has never heard anyone else call it that).  He played ‘Fidgety Feet’, what a maestro.   Another number to mention was ‘I’m Coming Virginia’, to which Bernie gave a delightful clarinet intro’ to. 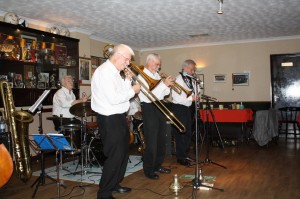 They chose to play ‘That Da Da Strain’ in which Laurie had a special feature on drums, wow can he play, well he wasn’t with the Alex Welsh for nothing. 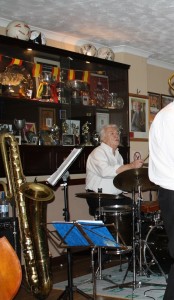 Nick joined the frontline with ‘Snag it’. He has a brilliant voice and Keith remarked how he sounded (and looked a little) like Seasick Sid. Only a little bit Nick, but you’re wonderfully entertaining too. One of my favourite numbers by this band is ‘Rebecca, Rebecca, Get Your Big Legs Off of Me’’. Max plays harmonica and also sings, well you should hear him sing it, he is super too. 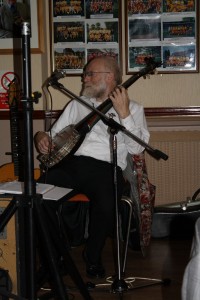 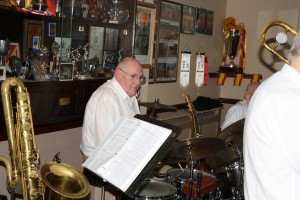 During the interval, Laurie (who had never heard Keith play drums before), said to him, ‘Why don’t you have a sit-in’? Anyway, Bob called Keith up to play ‘Blues My Naughty Sweetie’. Keith did extremely well, considering he hasn’t played for a year and not on his own drum kit AND after Laurie’s special too. They even gave him solos. Thanks Laurie, for asking him. I managed to video a couple of numbers (obviously Keith’s number included, hmmm). 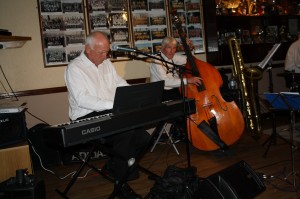 I also videoed Hugh’s feature number. However, his electric piano malfunctioned.  He tried a couple of times more, but had to give up, much to my dismay, because of the video.   These videos will be dark (due to being taken with my old mobile) and will take a little while to upload on this site, but look out for them soon. Max sang the next number ‘I Had a Funny Feeling’. How brilliant he is, also playing harmonica (no, not at the same time-ha). Then I was so pleased to capture on video next the maestro in action playing Big Bertha with ‘Elephant Stomp’, a number I had always hoped to catch on film one day. Then the last number was sung by Bob and played especially for Keith and me. It is a Tommy Dorsey hit number that was written by our very dear friend, Leslie Baguley (see our tribute page for him), called ‘Nice To Know You Care’ (also video). Everyone was on the dance floor, including Keith and I (both had tears in our eyes). So once again thanks Bob, for learning it. He says he only plays it at Farnborough, but might I suggest playing it elsewhere too, it would help to keep it alive for longer.  To keep all music ‘live’, just support it. So that’s all folks, see you next week with the ‘Limers’ (Limehouse Jazzband).

Keith hasn’t played drums in over a year, not since falling down the stairs and hurting his foot. In the past, he has played with many bands, plus had his own band, ‘The KGB’.  Some of you will remember he was with ‘Mac White and Charlie Connor’s Spirit of Bechet’ (Mac, who could play eight different instruments, mainly clarinet, was with ‘The Temperance Seven’, ‘The Pacedena Roof Orchestra’ and ‘The Midnight Follies’. However, Keith broke his arm/hands on five different occasions, plus I gave him concussion on those five different occasions, due to hitting him – well!  Only joking.