It’s BOB DWYER’S BIX & PIECES band back here at FARNBOROUGH JAZZ CLUB (Kent) to entertain us tonight – Friday 28th February 2020. I’m so amazed how quickly another weekend is looming up on us. BOB was playing with Keith’s band last Friday, and I was telling you he would be back with his own band ‘next week’ and here we are already. Anyway, trombonist & singer BOB has booked MALCOLME WALTON to play trumpet, with PAULA JACKMAN on clarinet, plus HUGH CROZIER on piano & vocals, GRAHAM COLLICOTT on drums and MIKE BENNET on double bass. Lovely regular JOHN BAYNE unfortunately is unwell, so his Doctor has advised him to stop playing for a while.  Anyway, I think it might be the first time both Paula and Mike have played for us here at Farnborough, so please give them both our best Farnbronian welcome, won’t you. Come and join us for another wonderful evening’s entertainment Happy birthday to Christine and Ken – that’s presuming their families don’t pinch them from us …. Your hosts Diane & Keith

As I promised, I returned to sort some photos out, but found problems, such as my newsletter for Bob’s last gig in October 2019, seems to have disappeared.  I am soo tired having only had 3-4hours sleep last night, plus to sort something out for both Paula and Mike would take too long, so will just leave you with this one of  JOHN BAYNE and to wish him a quick recovery and send everyone’s love (I know Mike will not let you down on double bass). 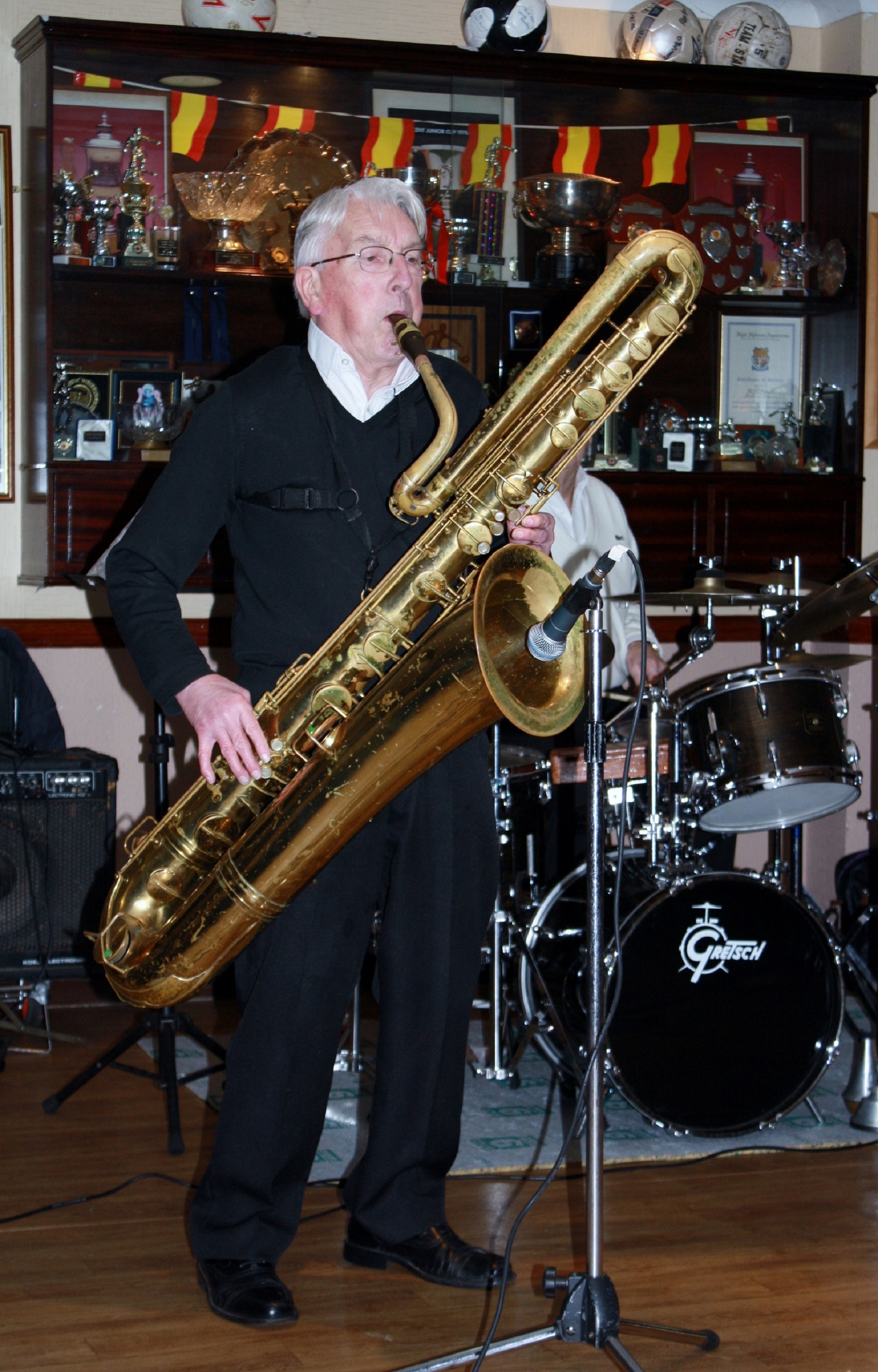 I’m so excited because Keith has his own GRANTIE’S DIXIE SIX playing this Friday, 21st FEBRUARY 2020 at Kent’s FARNBOROUGH JAZZ CLUB.  I’m sure he will be swinging this lovely Dixieland jazz band along like a good’ern. Why do I say that? Well, because he has just acquired a fabulous set of Zilgian cymbals that he just can’t wait to play. I know you will all love his great big grin too. Hey and what about the band! Well we have a fabulous body of musicians to entertain you. How about this – we have PETE RUDEFORTH on trumpet (also sings), plus tenor sax player JOHN LEE, trombonist BOB DWYER (another singer) and swinging away in the engine room will be TIM HUSKISSON on piano and ROGER CURPHEY on double bass, who, I’m sure, will be calming Keith down at the same time – hmmm).  I’m hoping to sing a song on the night. The music begins at 8:00pm and goes on until 11:00pm. Don’t forget, we have free off-road parking. Still only £10 entrance and you will have some first-class jazz. Your hosts, Keith and Diane.

P.S.  We (thats ‘4–In-A-Bar+1) will be playing this Sunday, 23rd February 2020 2.:30pm-5:30pm – at Ye Olde Whyte Lyon, next to Princess Royal Hospital in Locks Bottom, Orpington, Kent, Curser onto our page (top of the website) for further details.  We play relaxing ‘dinner music) and is very popular. (John Lee, Tim Huskisson, Roger Curphey, Keith Grant and myself – Diane Grant. 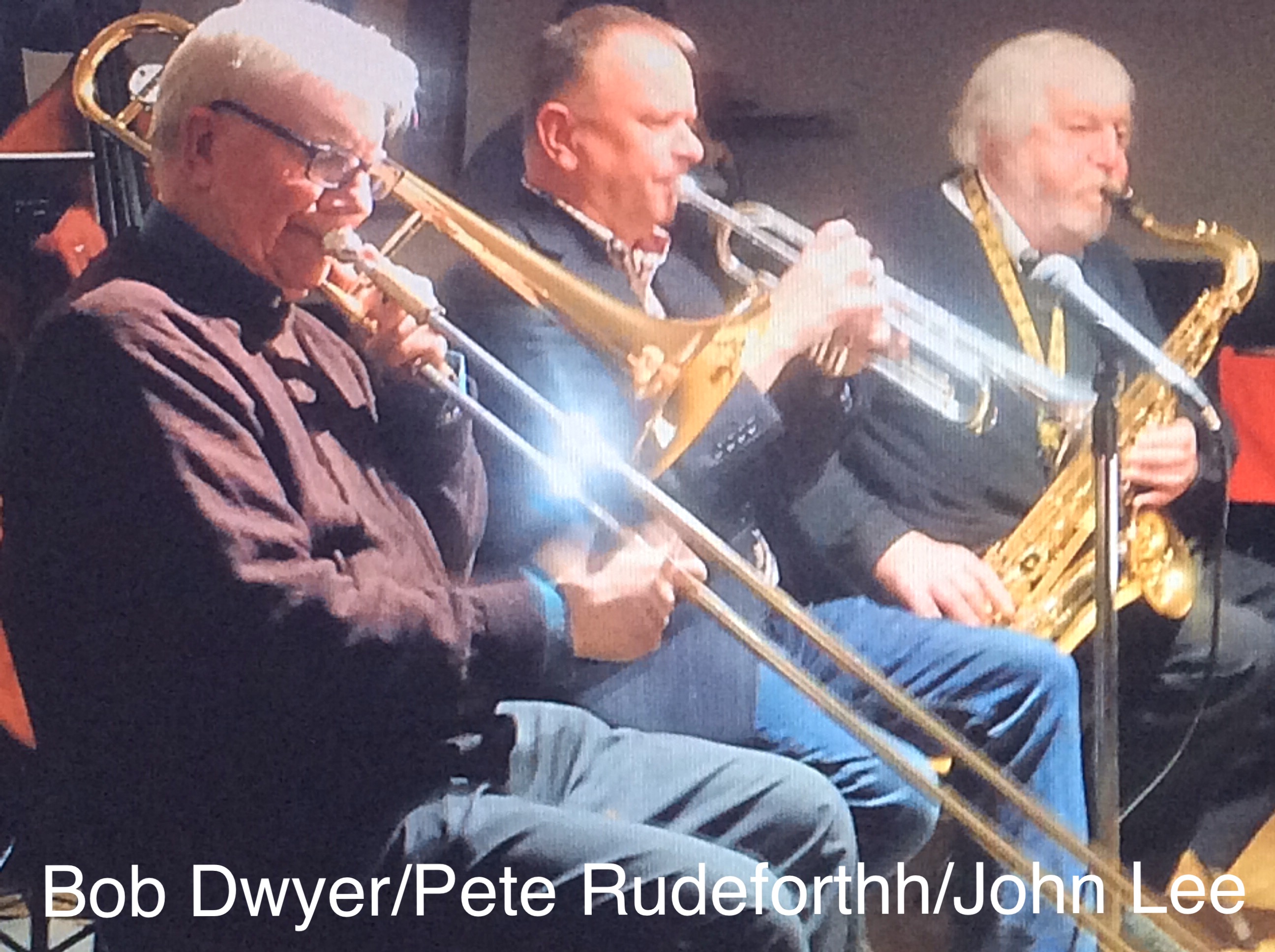 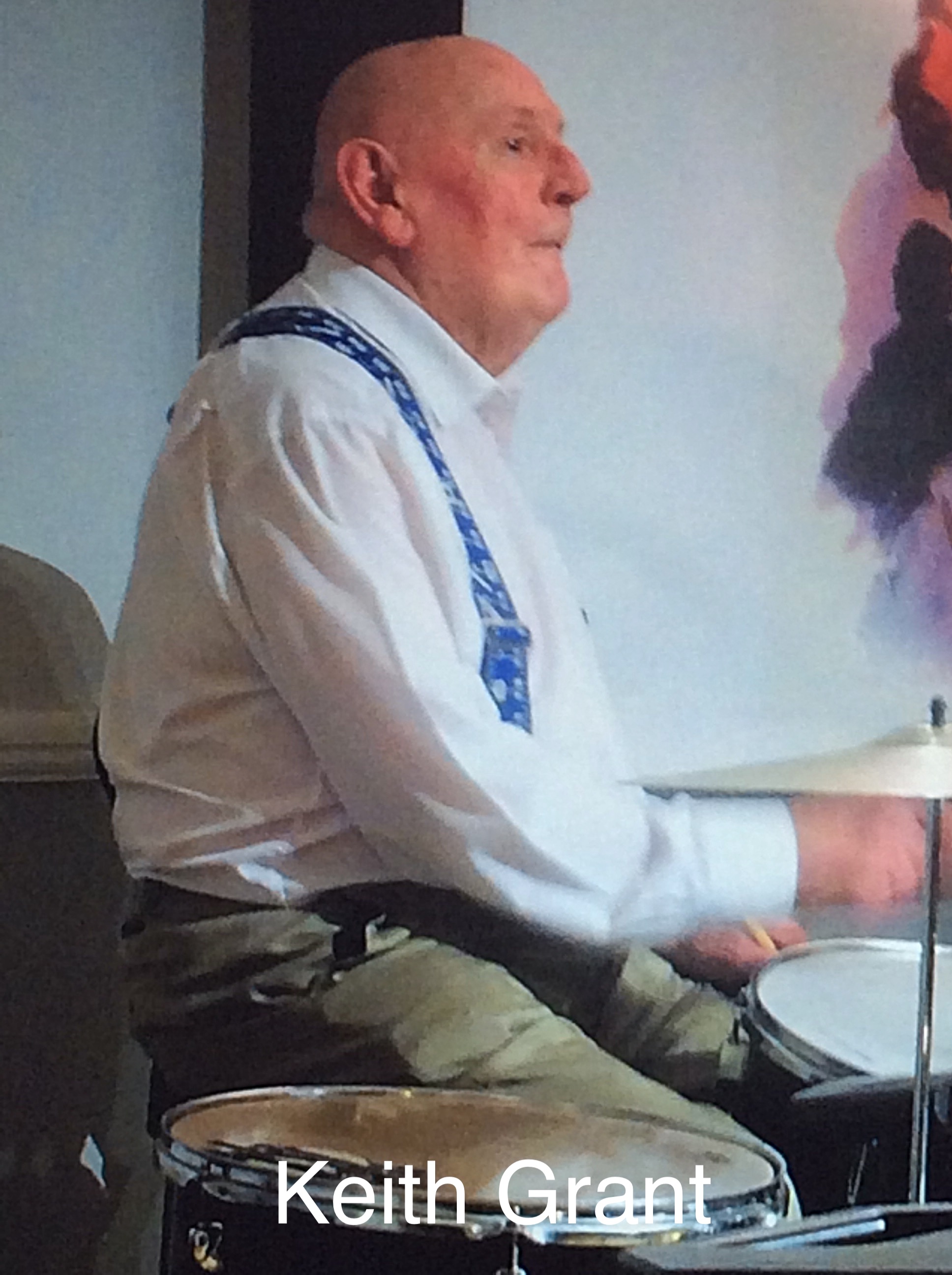 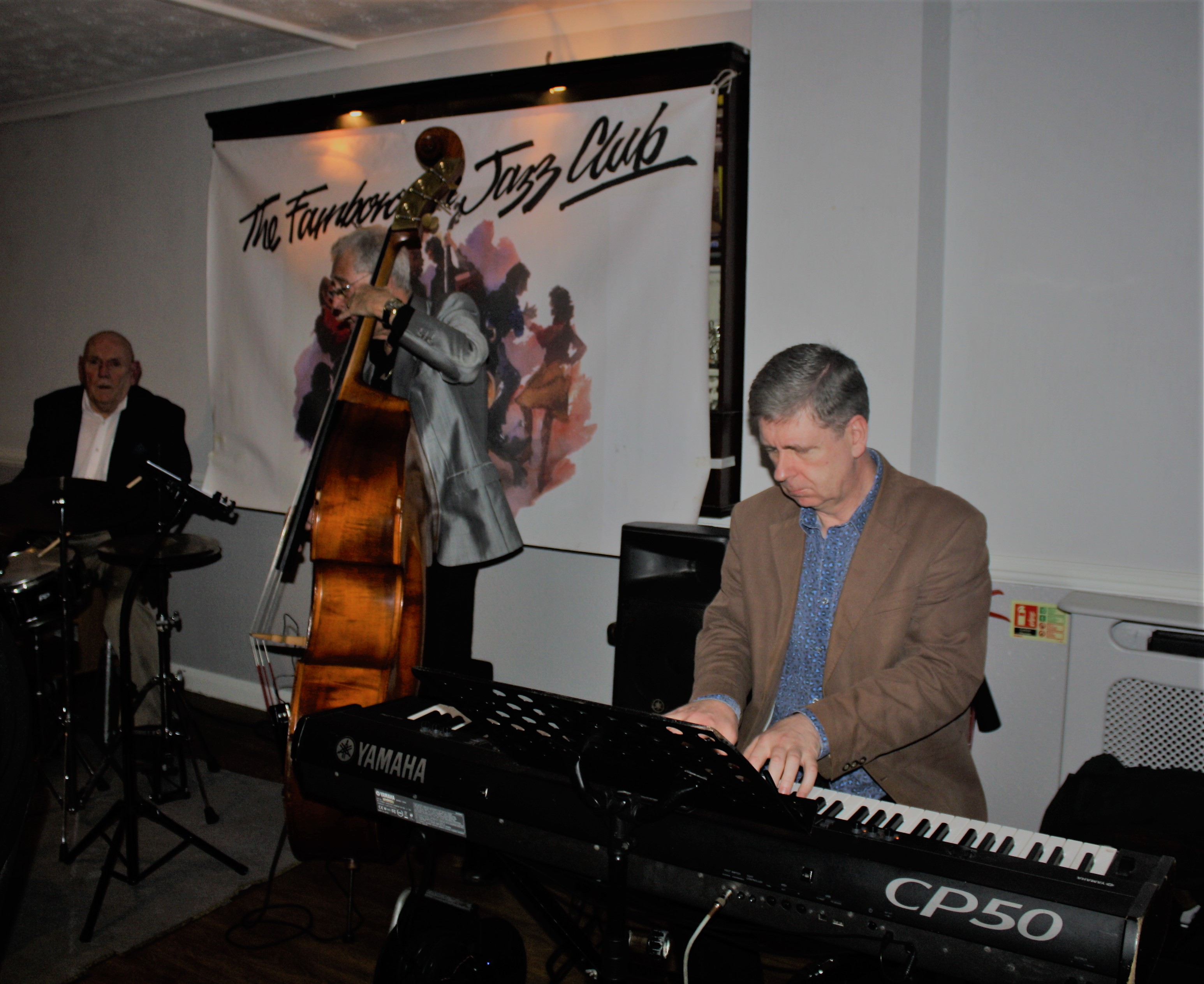 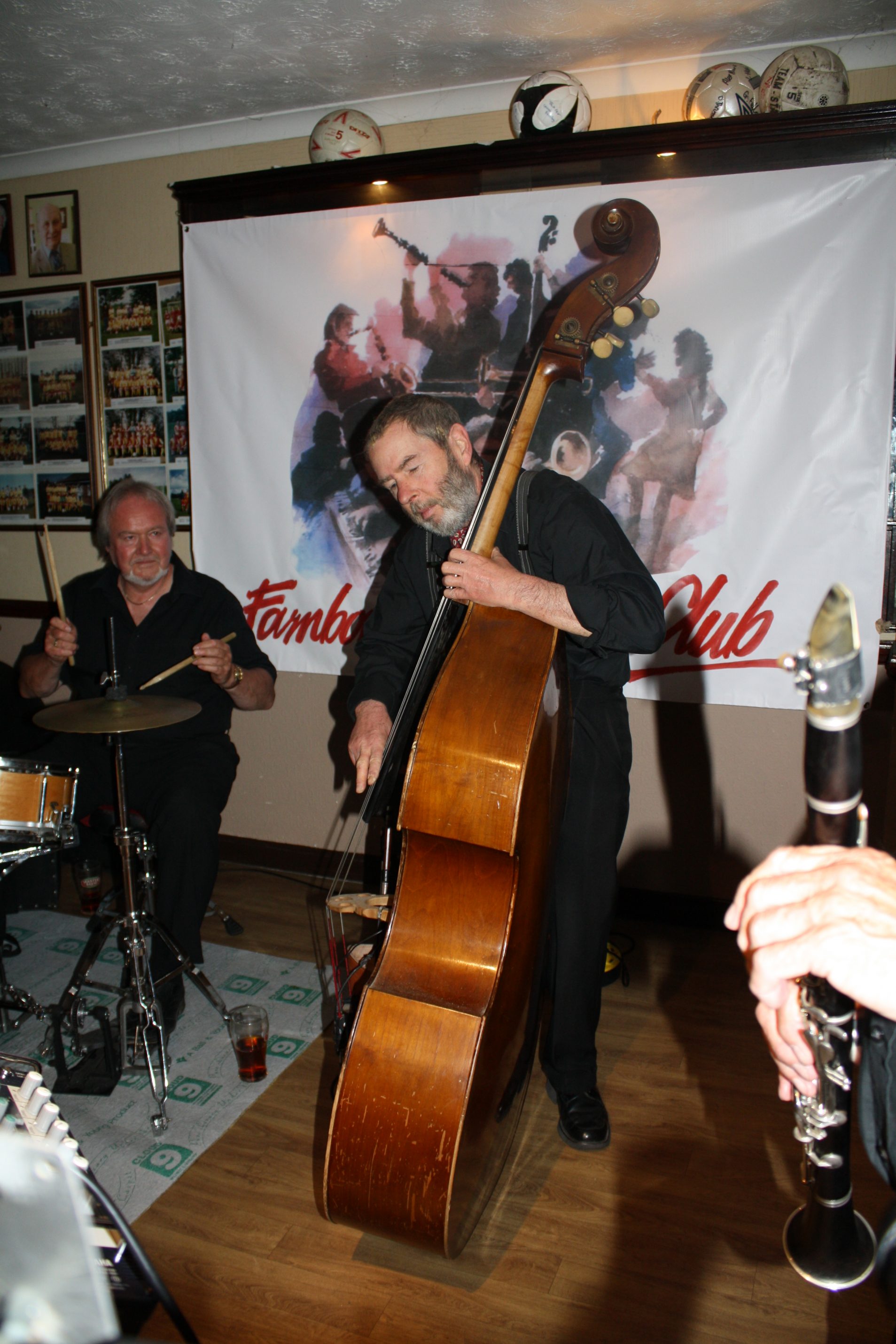 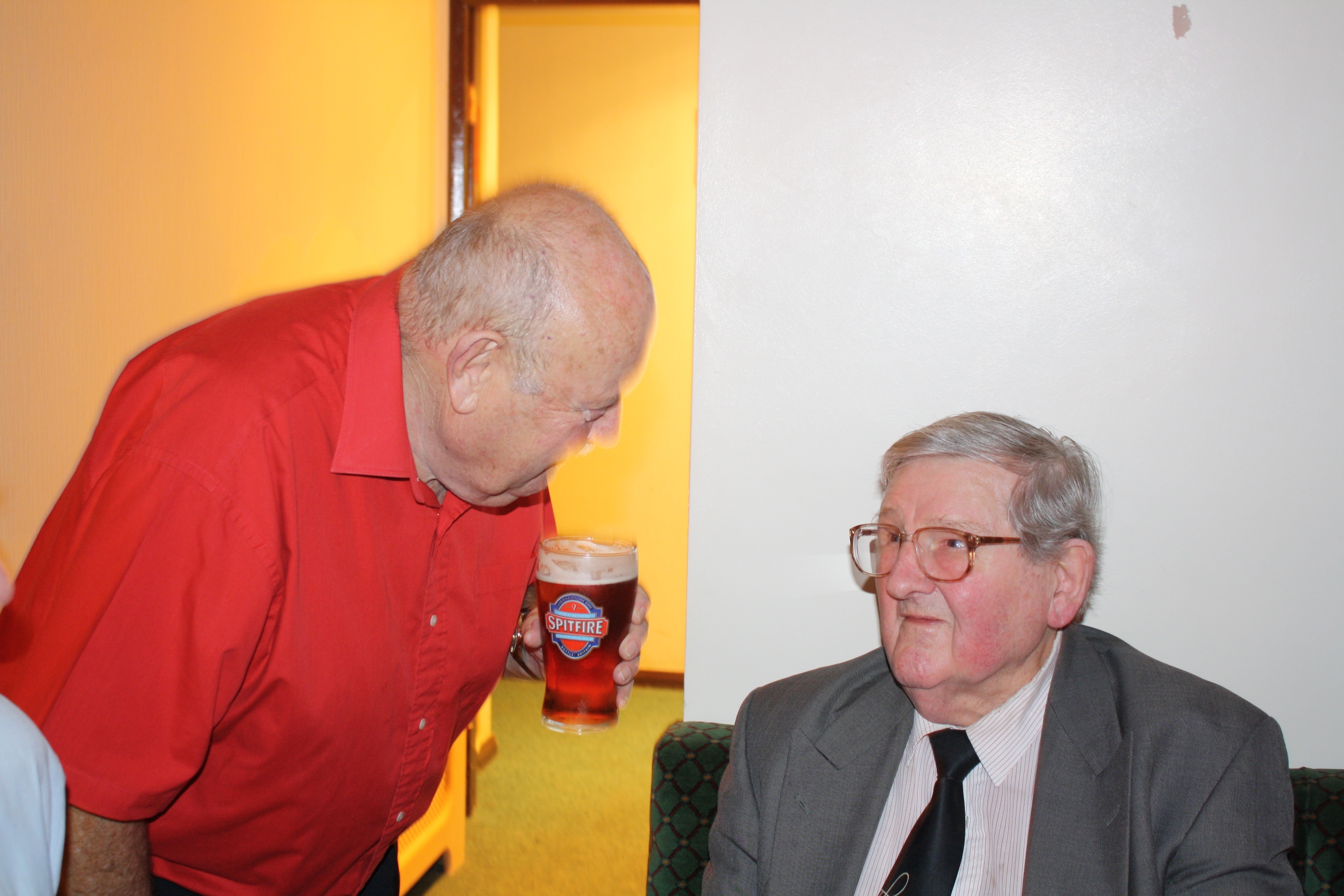 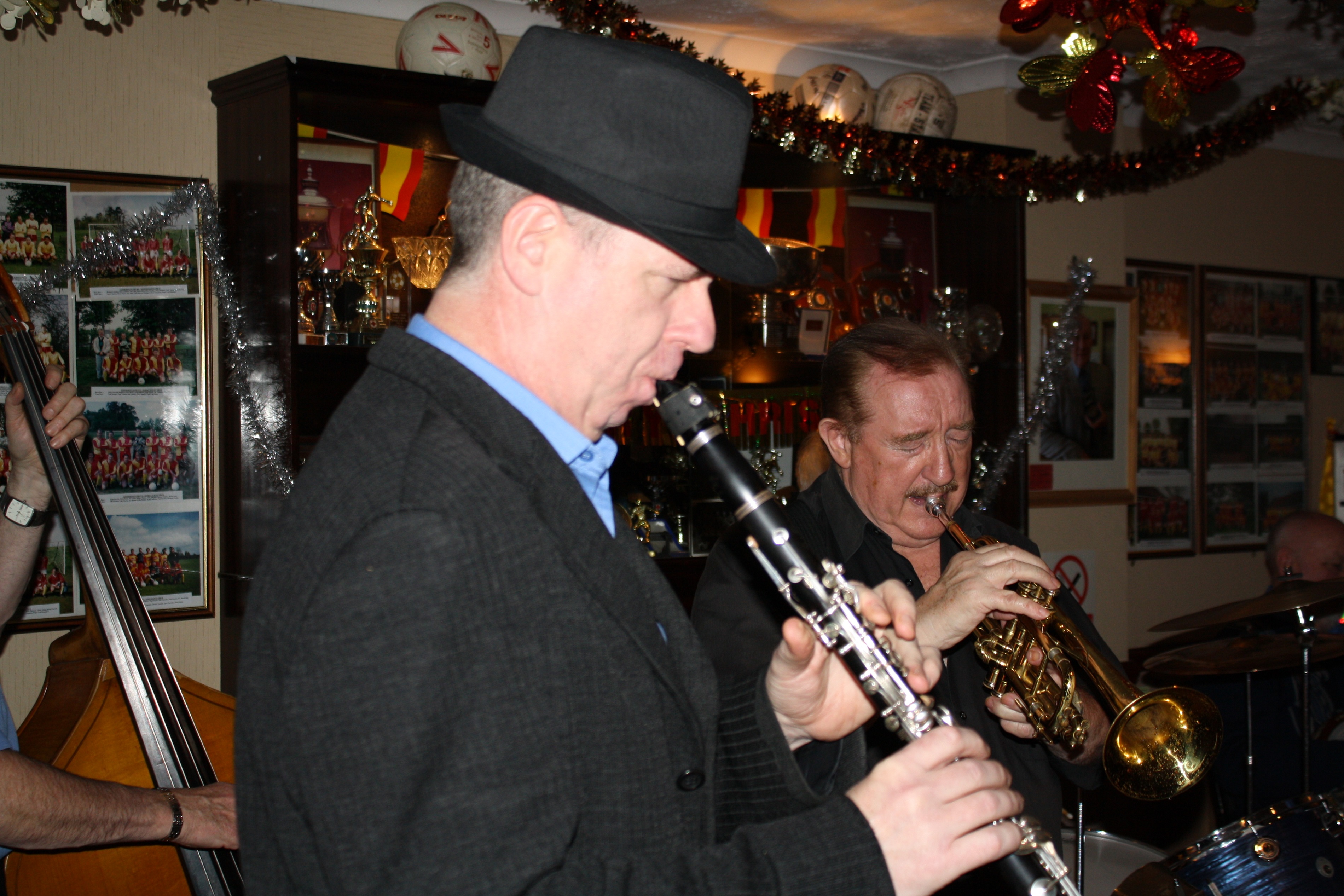 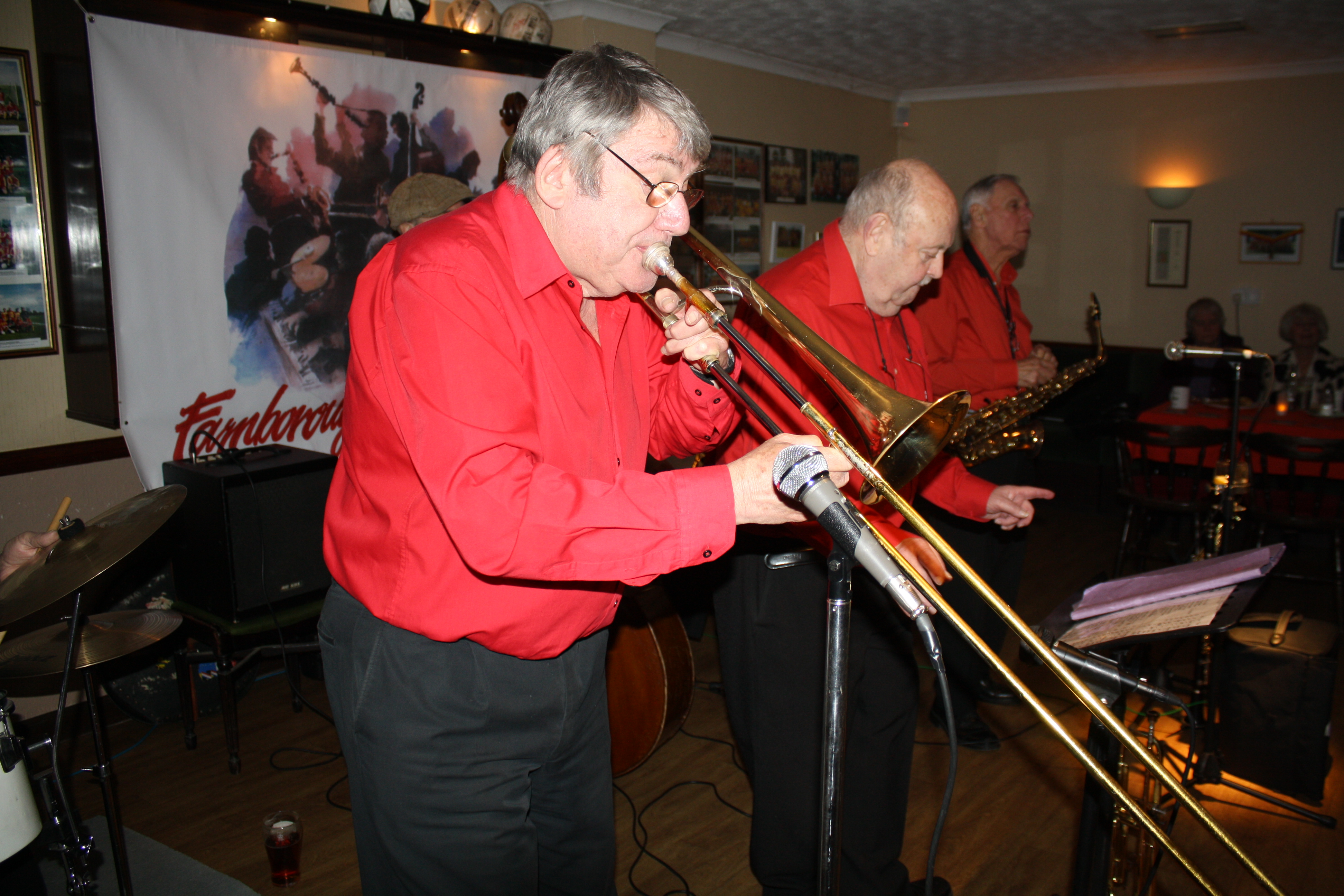 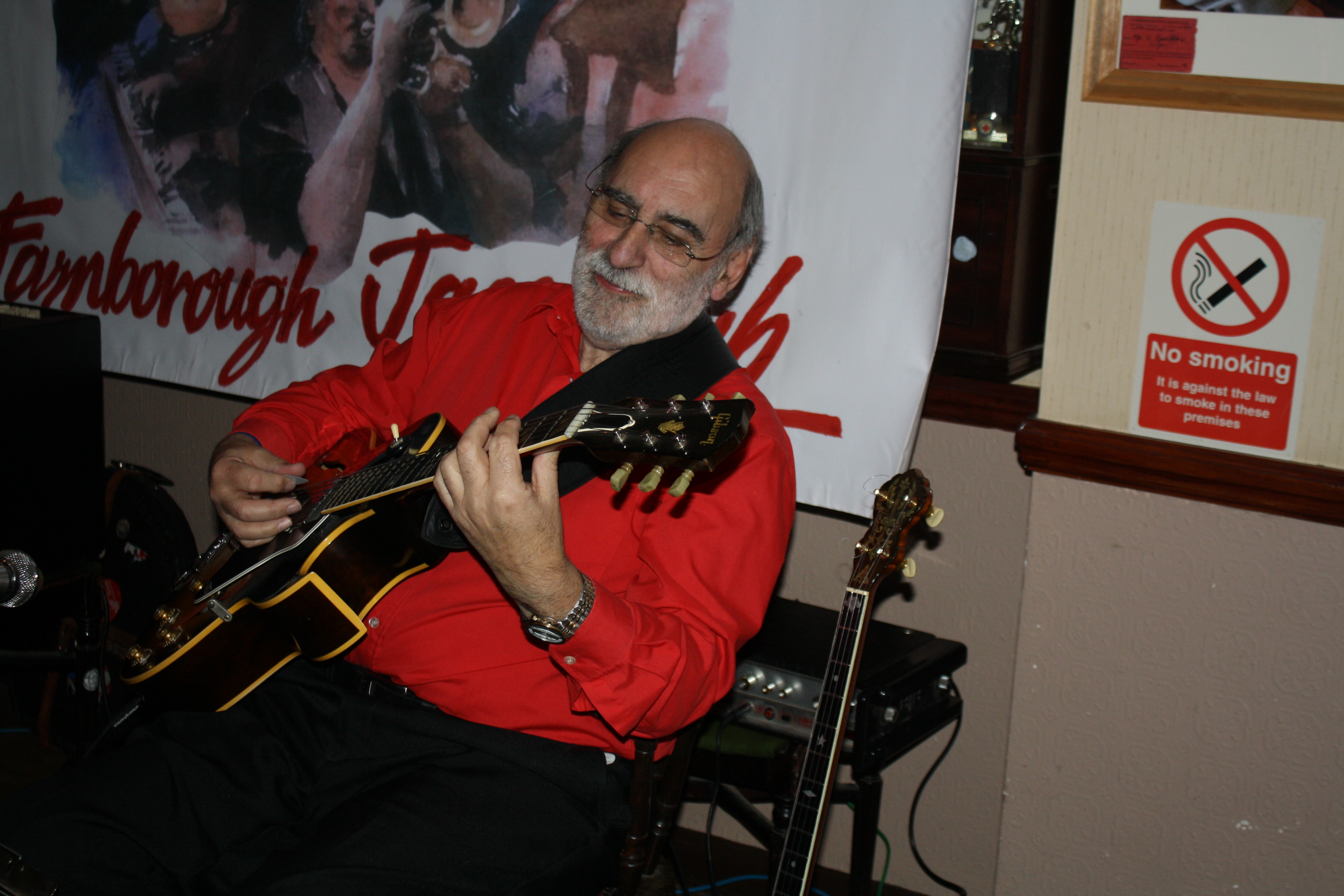 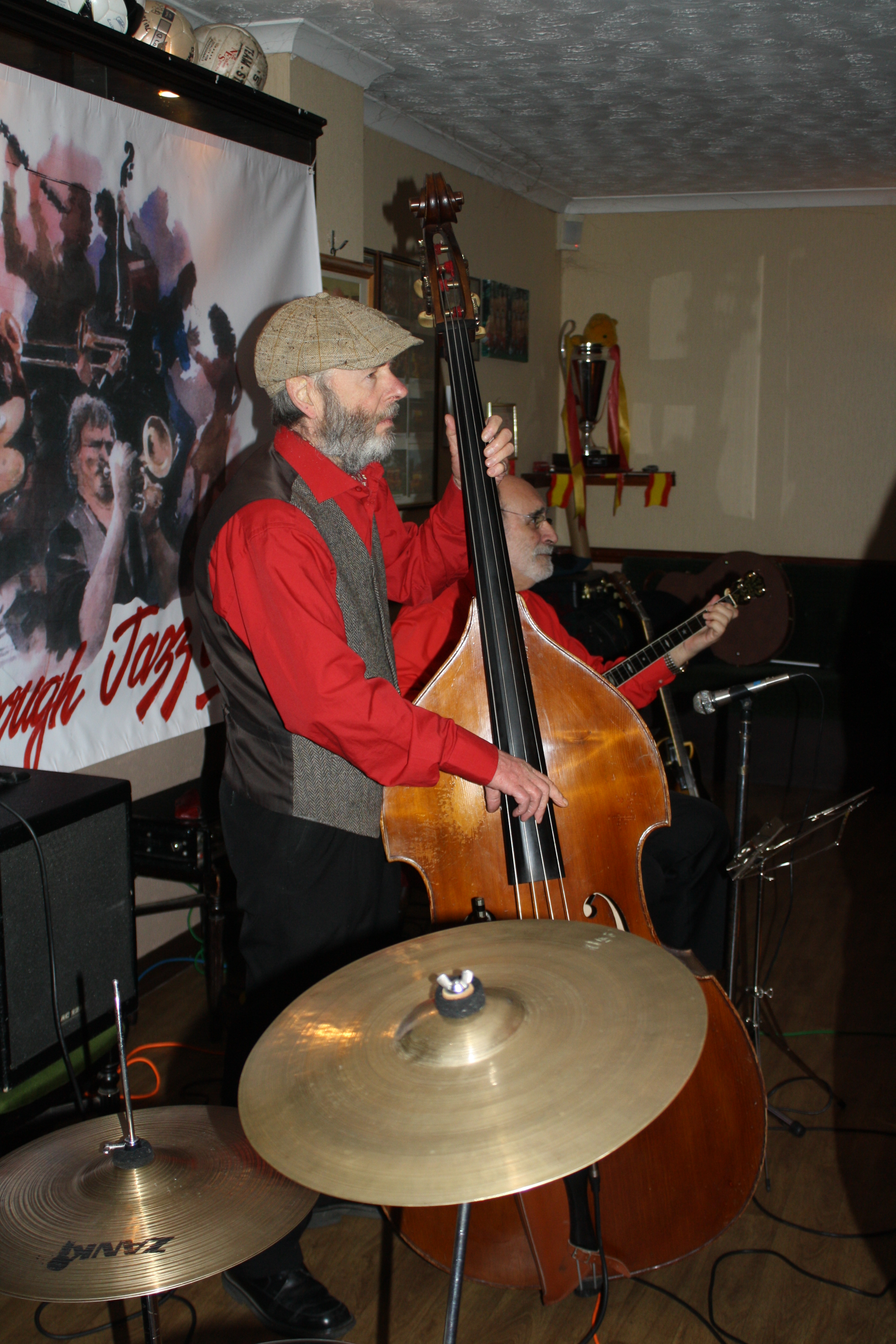 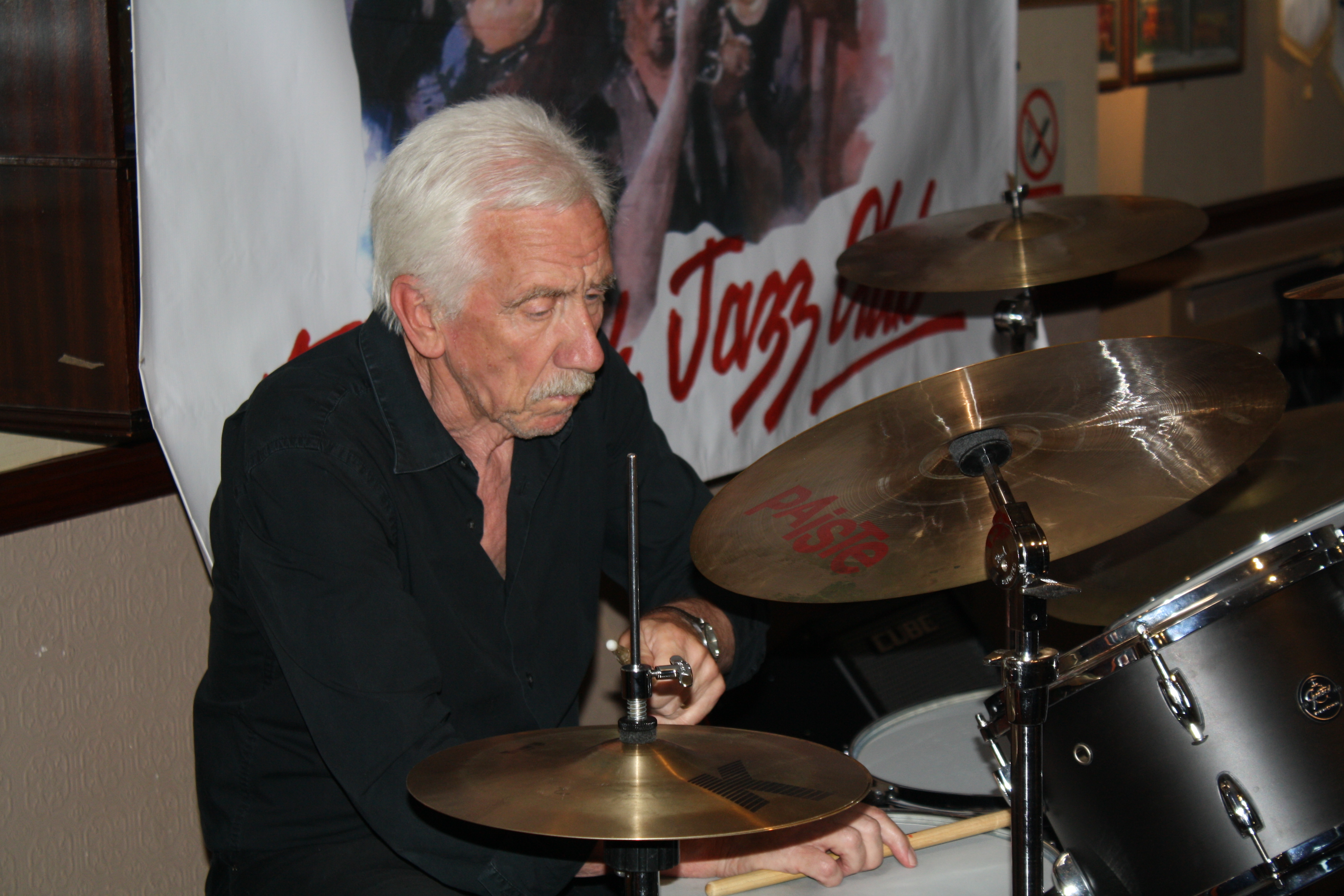 YES – YES – YES (trumpet blast)– WE ARE BACK!   YOU KNOW YOU HAVE MISSED US – YOUR FARNBOROUGH JAZZ CLUB (Kent)!!!!!  It’s a whole new decade – and whether you are happy, or sad about it – a whole new retrieved independence – and I’m not even going to mention the word – ha, ha!  Let’s get back to jazz – dancing – and whether you are going to commiserate or celebrate, let’s enjoy ourselves.  Keith and I have missed our Fridays just as much as you.  It will be a great evening and should be a sell-out (like our Christmas dos) – so don’t miss this FRIDAY, 7th FEBRUARY 2020, our first of the year – yippee.

It’s the GOLDEN EAGLE JAZZ BAND and these Golden Boys are banjo player, singer & very funny joker (although sometimes corny, but don’t tell him I said so – he,he) band leader – KEVIN SCOTT.  He will be joined by TONY CARAVIS playing trumpet, ALAN CRESSWELL playing reeds (singer too) and SIMON WYLD playing trombone, plus JOHN SIRET playing double bass and MALC MURPHEY playing drums (another singer).  These musicians (and I will cut and paste the following) will make sure your feet are tapping, your faces are fixed with big smiles and you will go away at the end of the evening, brimmed full of happiness. What more can I say, except if you haven’t been before, make this your first visit, entrance will cost you just £10. You will not be disappointed – we love to dance, have friendly bar staff (namely Ian [who is the Football Club’s President – Sports Club’s secretary], Kath and Barb), a great raffle, plenty of free off-road parking – so see you tomorrow -7th for some great ‘live’ jazz.  (sorry – will need to return later with some photos).

Your hosts, Diane and Keith.