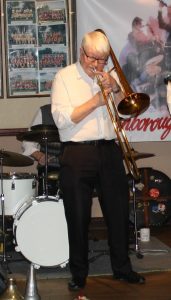 This week, we have the return of BOB DWYER’S BIX & PIECES, who were to have celebrate my birthday last January, but remember, we had to cancel due to icy and snow conditions.  That all seems a long time ago now, but here we are again, glad to welcome them back to FARNBOROUGH JAZZ CLUB on Friday, 31st March 2017.  Trombonist &vocalist BOB, has MALCOLME WALTON on trumpet, with TIM HUSKISSON on clarinet, HUGH CROZIER on piano &vocals, JOHN BAYNE on double bass &bass sax, DAVE PRICE on banjo &guitar and GRAHAM CAULICOTTE on drums.  I intend to party again with them – of course any ol’ excuse aye!

‘Keep Jazz Live’ with your hosts, 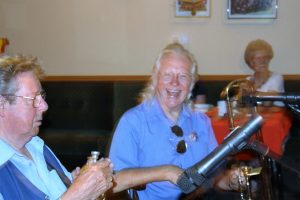 How about this photo of our beaming ‘Kid’, George Tidiman on trombone, seen here with Ken Simms on trumpet. Taken at Farnborough Jazz Club (Kent) on 22nd July 2016 with his own band – George ‘Kid’ Tidiman’s All Stars. Photo:Mike Witt.

It’s Our ‘Kid’ GEORGE TIDIMAN on trombone, back again to play for us.  What a happy atmosphere he brings to us too, especially as he has booked the best – DENNY ILETT on trumpet, with TIM HUSKISSON on clarinet, ‘SOUTHEND BOB’ ALLBUT on banjo & vocals( and what vocals), JOHN SIRETT on double bass and BILL FINCH on drums.  Great dancing and great laughter can be seen and heard – you betcha.  That will be here at Farnborough Jazz Club this Friday, 24th March 2017.  Hey, must remind you, our clocks spring forward 1 hour at 1:00am Sunday morning.  Yeah – that means Spring Time is really here – Yippee!

Diane and Keith, your hosts for some great jazz.

British Summer Time was first established by the Summer Time Act 1916, after a campaign by builder William Willett. His original proposal was to move the clocks forward by 80 minutes, in 20-minute weekly steps on Sundays in April and by the reverse procedure in September.[6] In 1916 BST began on 21 May and ended on 1 October.[7] Willett never got to see his idea implemented as he died in early 1915.

An inquiry during the winter of 1959–60, in which 180 national organisations were consulted, revealed a slight preference for a change to all-year GMT+1, but instead the length of summer time was extended as a trial.[9] A further inquiry during 1966–67 led the government of Harold Wilson to introduce the British Standard Time experiment, with Britain remaining on GMT+1 throughout the year. This took place between 27 October 1968 and 31 October 1971, when there was a reversion to the previous arrangement.

Analysis of accident data for the first two years of the experiment, published by HMSO in October 1970, indicated that while there had been an increase in casualties in the morning, there had been a substantially greater decrease in casualties in the evening, with a total of around 2,500 fewer people killed and seriously injured during the first two winters of the experiment,[10][11] at a time when about 1,000 people a day were killed or injured on the roads.[12][13] However the period coincided with the introduction of Drink-Driving legislation, and the estimates were later modified downwards in 1989.[11] 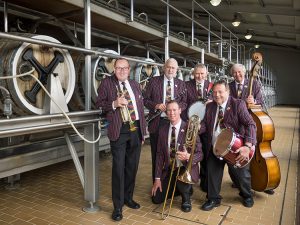 MIKE BARRY’S UPTOWN GANG is set to play again for us this Friday, 10th March 2017 here at the Farnborough Jazz Club (Kent).  Band leader, MIKE BARRY, who plays trumpet & sings, has booked GOFF DUBBER on reeds, ‘WHISPERING’ MIKE HOLT on trombone (who also sings), JOHN STUART on banjo & guitar, ROGER CURPHY on double bass and GRAHAM COLLICOTT on drums.  I just can’t believe it has been almost a year since this particular band has played for us.  However, don’t forget Mike has four bands who play here, so that is why it doesn’t seem that long ago since we saw ol’ smiley face.  Anyway, I can’t wait to see this band of greats on Friday.  Come and join us, to make it another fabulous fun evening – the weather is on the up, so we expect to see more of you – lighter evenings and all that jazz! 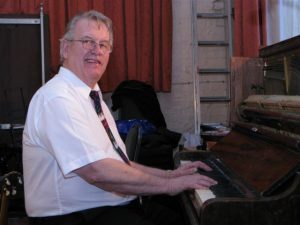