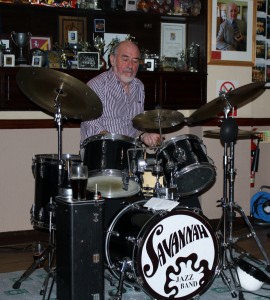 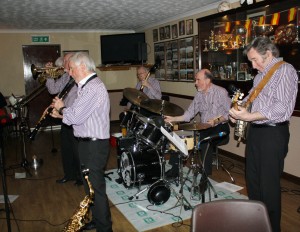 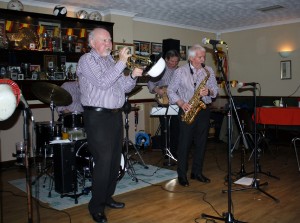 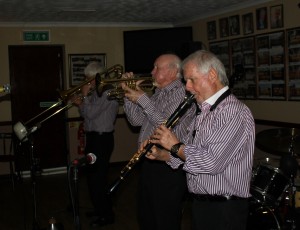 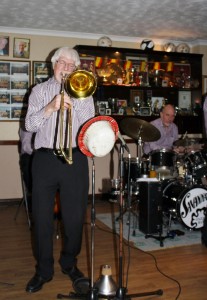 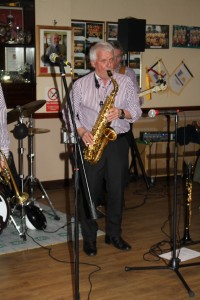 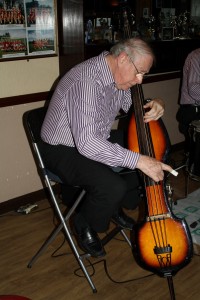 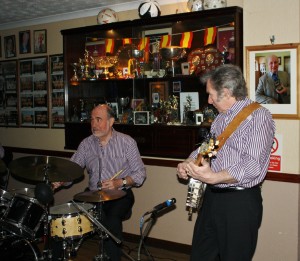 ‘LAURIE CHESCOE’S REUNION BAND’ always do it right – entertain us, I mean and Friday, 20th March 2015 at the FARNBOROUGH JAZZ CLUB was no exception. Drummer and leader, Laurie, with his fellow musicians, ALLAN (‘Lord Arsenal’) BRADLEY on trumpet, piano & vocals, JOHN LEE on reeds, DAVE HEWITT on trombone & Baritone Horn, JIM DOUGLAS on banjo & guitar and PETER SKIVINGTON on bass guitar & bass ukulele, I did advertised they can’t help but delight you all. Well, although you didn’t arrive by the coach-load, it was quite a good turnout. Unfortunately COLIN BRAY was not with us – hurry up and get well Colin, so you can join us on the next Reunion. 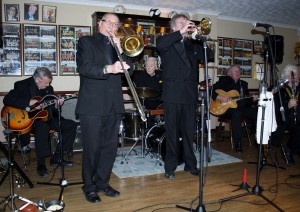 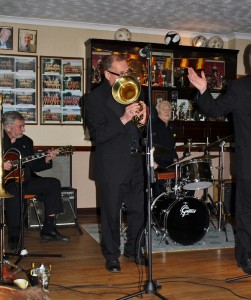 I will begin this newsletter with the mention of Dave’s Baritone Horn, which he played when they did ‘Riverboat Shuffle’ (Allan mentioned Dave’s nickname for the horn, being his “valued bed pan!” hmmm. I can assure you it doesn’t sound like one – ha). They were all playing with such brilliance (his Lordship with muted trumpet and John on clarinet). What a team. Dave then began with a super intro (again on b.horn) to the next number ‘Sleepy Time Gal’. John had changed to Tenor sax and Allan sang. We were being spoilt for sure and to follow came ‘Taps Miller’, with John still on tenor, but with Dave on trombone this time. 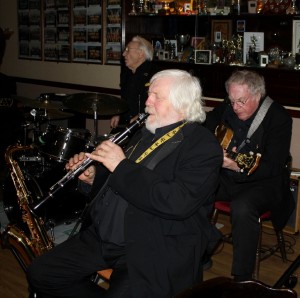 The next number I wish to mention was John’s Special. I don’t have to tell you how special John is, it goes without saying, but I must mention Laurie gave his all. Yes, what a brilliant drum solo. Keith was standing with his mouth agape. The number was ‘Back Home in Indiana’ – wonderful. They played one more number before the break, ‘Oh Marie’ and Allan sang. We audience got up and enjoyed doing a line-dance. When they returned from their break, they all sang ‘Bourbon Street Parade’ led by Allan and what a great rendition from all of them (including us audience of course). I know I have said it before, but must emphasise what a lovely voice Allan has, which shows when he sings ‘I Thank You Mr Moon’, need I say more. It was Jim Douglas who came up next with his special, ‘God Bless the Child’, with Pete backing him. What a performance. The bands last number to end the evening was sung by Allan (Bing Crosby’s hit) ‘Pennies from Heaven’. This song was a big hit with so many top stars, including Louis Armstrong and a great number to end the evening with. Sorry to be so repetitive, but another happy ending to a lovely evening, leaving you wanting for more.

You have to agree, ‘live’ jazz is fun.

MAHOGANY HALL STOMPERS entertained us here at FARNBOROUGH JAZZ CLUB on Friday, 13th March 2015 and everyone showed they really enjoyed the music and banter that was created by band leader BRIAN GILES (cornet) and the boys. Brian had booked TIM HUSKISSON on reeds, REX O’DELL on trombone & vocals, ‘SOUTHEND BOB’ ALLBUT on banjo & vocals, CHRIS MARCHANT on drums and EDDY JOHNSON on double bass. I asked for everyone to come with dance shoes to the fore, for a wonderful evening of happy jazz. Well you judge for yourselves – cos yes, we had fun. For a start, Brian (with his lovely Yorkshire sense of humour and accent, not forgetting his cornet playing) is always a joy and manages to bring a great choice of tunes to play. They don’t often play repeats, unless especially requested to do so, but still managing to choose great favourites.  Their first number, sung by Bob, was ‘Cake Walking Baby’, one loved by most bands and a favourite of dancers too, due to its jaunty tempo. 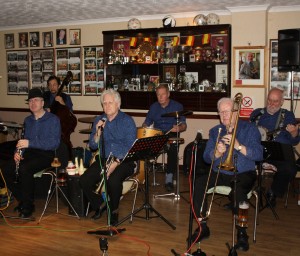 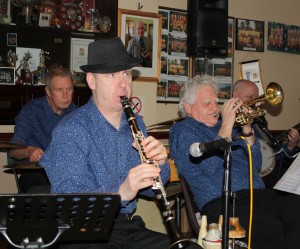 I’ve got to mention ‘One Sweet Letter From You’, because I jotted down ‘great clarinet playing from Tim’, well he is terrific. My next jotting was Rex singing ‘Everywhere You Go’. Rex is another talent we are lucky to enjoy at Farnborough – am I gushing? Sorry! Well, I can still gush some more, because the next song ‘Just Squeeze Me’, brought on the dancers – in fact the dance floor was packed.  That’s just what I like to see. Rex sang the next number too, ‘You Always Hurt the One You Love’ (I’m sure he never has – he’s too nice – ha). Then we came to the dance floor to enjoy our line-dance to ‘Moose March’, really fabulous. Next came everyone’s favourite by Bob, ‘I Wanna Be A Dog’. He composed his own version and is not allowed to go home now, without singing it for us and yet, still there are people who haven’t heard it – it’s a real fun number. 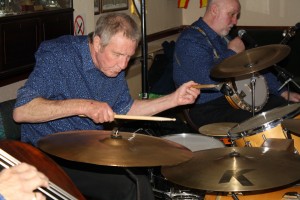 Rex followed on with singing a mixture of ‘The Charleston’ tunes and we loved performing our line dance again to this. Well, it is a great tune for the dance. More and more people are joining in – it’s a little bit of fun, nothing fancy and nothing intricate, just beaming faces from the dancers. I put two big stars against the next song ‘I’ve Got Them Too Good To Be True Blues’, because there were some brilliant solos from everyone. It was strange they played the next number ‘When the Midnight Choo-Choo Leaves for Alabam’, because it was played by last week’s band and I hadn’t written their newsletter, till after this evening. It is always weird like that, just how tunes do follow on by chance, when you think how many millions of popular jazz tunes there are to choose from. But then that is what is wonderful about composers – to think they can still come up with something ‘new’. So please come back for more, won’t you? The Martyn Brothers with their magic are here next Friday AND wowie, don’t get too excited, one of our raffle prizes will be an Easter Egg, now we’re spoiling you – ha.

‘When the Midnight Choo-Choo Leaves for Alabam’ – Irvin Berlin (1912) 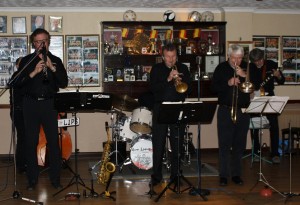 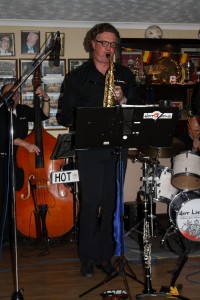 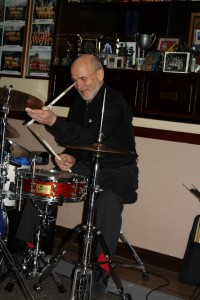 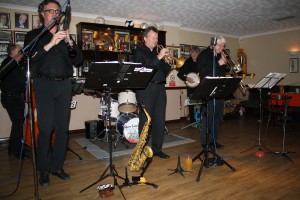 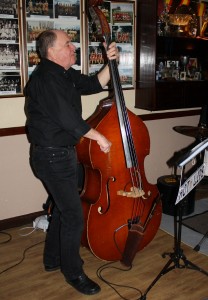 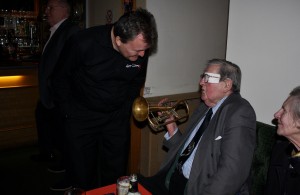