Please order your seat ASAP – £15 each – to include a buffet

Dress up for Partying in and be prepared to have tons of fun!

Bring your feet to razzle dazzle! 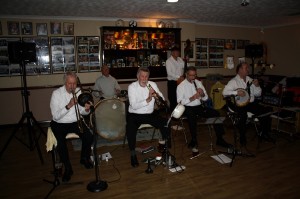 The poor things arrived to face a stressed out ‘Di’. I had been ‘through the mill’, so to speak (and nothing to do with Christmas), so they had a bad start, but it certainly did not phase these boys at all. They all have such a wonderful sense of humour, so it wasn’t long before they had me laughing. Once again, the evening was a happy one and great music ensued. ‘Calcutta (The Ladies of)’ was their starter for ten. Then ‘Tin Roof Blues’, with each of them performing fabulous solos. Obviously, they made a lovely job with ‘Chimes Blues’ – just a super one to enjoy dancing-wise too. 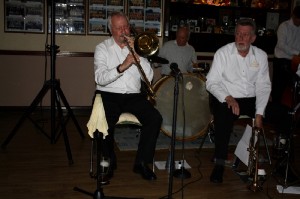 Mike (S) sang the next one, ‘Barefoot Boy’ (yes, another super voice). This band are a ‘sitting’ band. However, the front line all stood for finale for the next number (which as I have said before, is quite effective) and the number was ‘Bye Bye Blues’. After a small break, they returned to play a lovely Jimmy Dorsey number, ‘June Night’. They have made a CD entitled by this name. Kevin sang the next number, ‘Winin’ Boy’, likewise ‘Redwing’ and of course he also has a great jazz voice. The next number, well I thought he called it ‘Make Me a Parrot on the Floor’! I took ages on the internet, but couldn’t find any song near it!! However, I’m glad to say I suddenly thought “floor” and came up with “pallet” and yes, up came the song ‘Make Me A Pallet on the Floor’ – ha. 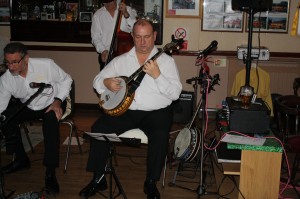 Certainly another unique number for us and one the dancers enjoyed. Unfortunately, there was a problem with someone with parking and I missed most of the last numbers (usually when all bands are really enjoying themselves and let rip), still can’t be helped. They will be back in the New Year, so make a note of the date (20th February 2015). 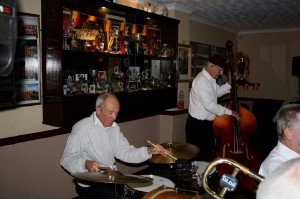 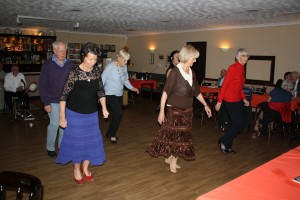 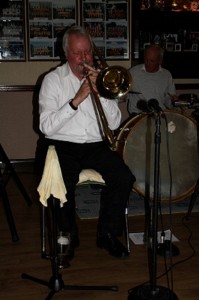 One last thing, please can you all email dianehorder@gmail.com if you wish to come to our Christmas party next Friday 19th December 2014. Entrance is £15 with buffet and entertainment by ‘George Tidiman’s All Stars Christmas Cracker’. 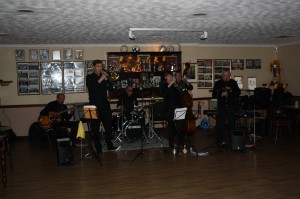 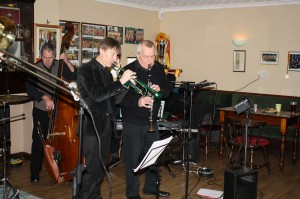 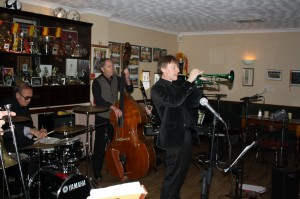 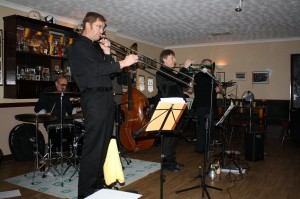 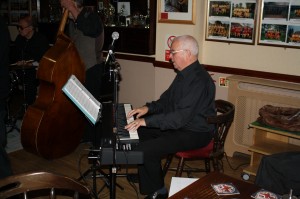 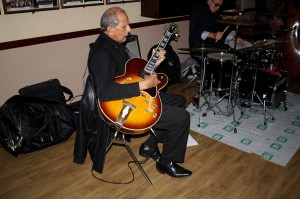 With MIKE BARRY’S UPTOWN GANG at Farnborough Jazz Club on Friday, 28th November 2014, we had another happy evening. I said last week, they are a very entertaining and relaxed band, with such lovely choices of music to set the dancers going. They didn’t let us down. They looked good, they were so professional and again everyone had smiles of enjoyment on their ‘boat races’. 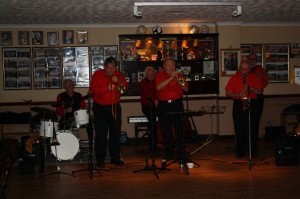 MIKE BARRY (leader, trumpeter & vocals) had booked BRIAN WHITE on clarinet, ‘WHISPERING’ MICK HOLT on trombone & vocals, TREFOR WILLIAMS on bass, JOHN STUART on banjo and GRAHAM COLLICOTT on drums. A lovely line-up. They began the evening with ‘River, Stay ‘Way From My Door’ and was sung by Mike, a number recorded by Frank Sinatra, which I loved. Oh yes Mike, don’t worry, I loved you singing it too, ha. They carried on with a foxtrot number ‘I’ve Found A New Baby’, with all of them performing fabulous solos. 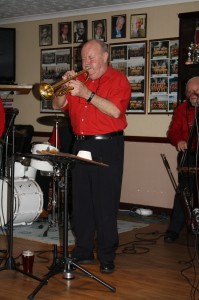 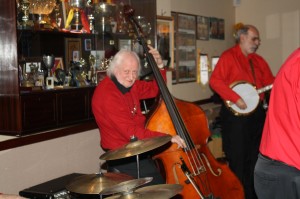 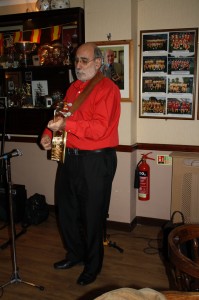 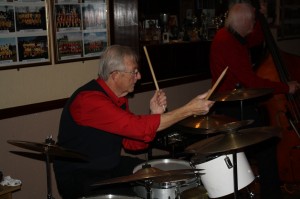 Next came ‘Panama Rag’ famously recorded by the three ‘Bs’ – Barber, Ball and Bilk. This was followed on with ‘Whispering’ Mike who sang, ‘It’s Only A Paper Moon’ (both Ella and Nat had hits with it). Then Brian, who also has a super jazz voice, sang ‘Buddy Bolden’s Blues (Funky Butt)’ (remember Hugh Laurie sang it?). After a break, they played a lovely fun number called ‘The Yama Yama Man’. I could be wrong, but I don’t recall it being played here before, (I wonder if it influenced the writing of ‘The Yawning Man’ from Tom Thumb? I must show my granddaughter that one). Anyway, it was a Broadway number from a Show ‘The Three Twins’ (an odd title). Again, another number I don’t think has been played for us before, being a Sidney Bechet hit number ‘Blues in Thirds (Caution Blues)’. I loved it.  Of course I just love to hear ‘Whispering’ Mike sing and act the Bing Crosby hit song ‘Wrap Your Troubles in Dreams’, what a star. He then harmonized with Mike, to ‘Down By the Riverside (Study War No More)’, which ended another truly enjoyable evening and can tell you one for your diaries, they will be back on 13th February 2015.

Cheers as always, Diane and Keith.