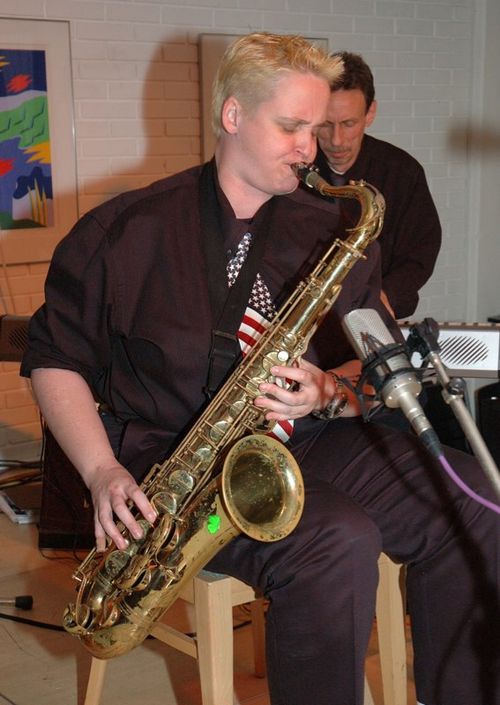 SARAH SPENCER’S TRANSATLANTIC JAZZ BAND made their annual appearance at our Farnborough Jazz Club, Kent on Friday, 12th September 2014. I said it all last year, but will repeat it. SARAH is a brilliant New Orleans tenor sax player, who must have a huge pair of lungs. What a strong performance she gives. Sarah moved to live in America some 16years ago. Since 2009, she has made an appearance at Farnborough during her annual tour back home. She has a wonderful dynamic personality and her playing certainly depicts this. Since the first time Sarah appeared with us back in our ‘Badgers Mount Jazz Club’ days in the 1980’s, she has played at The Purcell Rooms within London’s Festival Halls, plus world-wide festivals and of course, USA (www.sarah-spencer.com). STEVE GRAHAM was on trumpet, MIKE OWEN on trombone (he was here three weeks ago with ‘Baby’ Jules Jazzaholics), DEREK JONES on double bass (he, I think, experience his first visit here – poor thing!), ANDY MAYNARD on banjo and CHRIS MARCHANT on drums.  Last week I said “Sock it to them Sarah” and of course, she did just that.  I mentioned Sarah must have an enormous pair of lungs, well she also has a heart the size of a pumpkin, because she tries to please everyone, playing with all her heart and soul, which the whole band did.  They began the evening with ‘Smiles’ with the intention of putting smiles on all our faces, which obviously did. Next I noted down ‘Breeze’, being a nice, fairly slow romantic number for dancers. Mike, in particular, excelling with it. This was soon followed on by ‘C’est Magnifique’, keeping the dancing going. Then ‘Bouncing Around’ was absolutely wonderful, with the dance floor packed. Sarah sang the next number ‘Don’t You Feel My Legs’, certainly it showed an influence of living in New Orleans, what a great strong and controlled voice she has. This is quite a fun naughty number (remember Christine Tyrell singing it here? I know Keith would recall, ha). The next number I noted, was ‘Should I (Reveal Exactly How I Feel)’ and such a brilliant rip roaring performance was given by everyone. Sarah then dedicated the next tune to her boyfriend, George as he was unable to come. It was called ‘I’m Alone Because I Love You’ – lovely George. Mike sang the next song, (one of Judy Garland’s) ‘Under the Bamboo Tree’, he’s another musician with a terrific voice. Next number was performed with such a ‘wow’ factor and as I was dancing, have no note of what it was called – sorry. I mention this because it always shows that they are enjoying themselves too. Anyway, their last number which was played way after time and was called ‘Silver Bells’. Sarah, you are a star with a big love of your music, play on.  [Video of the band when they appeared here in 2013 can b found on Youtube as follows: http://youtu.be/PuC4eKvV1Bk] 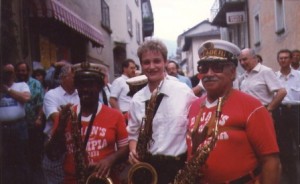 Sarah with the Harold Dejan’s Olympia Brass Band of New Orleans (Freddie Kemp and Harold) with some of the Ambrosia Brass Band in the background (Luciano, Bacchiocchi and Marco). 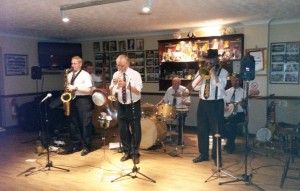 SARAH SPENCER’S TRANSATLANTIC JAZZ BAND made their annual appearance at Farnborough on Friday 13th September 2013. SARAH is a brilliant New Orleans tenor sax player, who must have a huge pair of lungs.  What a strong performance she gives.  The band are more than her friends, they are an extension of her ‘family’, so it is a joy to see them all perform together.  Sarah moved to live in America some 15years ago.  Since 2009, she has made an appearance at Farnborough during her annual tour back home.  As I said last week, she has a wonderful dynamic personality and her playing certainly depicts this.  Since the first time Sarah appeared with us back in ‘Badgers Mount Jazz Club’ days, she has played at The Purcell Rooms in London’s Festival Halls, plus world-wide festivals and of course, USA.  STEVE GRAHAM was on trumpet (who was with ‘The Panama Jazz Kings’), GEOFF COLE was on trombone (who was with Ken Colyer’s Band and his own Red Hot Five Band), ANNIE HAWKINS was on double bass (was a founder member with Max Collie’s Rhythm Aces, also with Ken Colyer and Sammy Rimington Bands), ANDY MAYNARD on banjo (was with New Orleans Echoes) and CHRIS MARCHANT on drums (was with Frog Island Jazz Band).  The band, I know, thoroughly enjoyed themselves, playing some great number.  I think it was Steve’s first appearance here at Farnborough.  His trumpet playing was beautiful and a delight to welcome. The first number I noted was ‘Mobile Stomp’, to which I remarked ‘Really full on and hot – fantastic’!  ‘Get out of Here and Go on Home’ was another number with a great beat and we had a few dancers appreciating it too.  Naturally they played Ken Colyer’s big hit from 1956, namely ‘All the Girls Go Crazy about the Way I Walk’, marvellous!  They followed on with lovely numbers called ‘Under the Bamboo Tree’, ‘I’m With You Where You Are’ and ‘On a Coconut Island’.  I managed to film their last number, ‘I Scream, You Scream, We All Scream for Ice Cream’) and if the band don’t object, I will try to load it on this website.  It is good enough for you to enjoy musically, although the film is still too dark to see.   (Update – Video can be found on  Youtube as follows: http://youtu.be/GrVCB5cWxek )

What an evening, I just loved it all.