We promised you would have some fun with HARRY STRUTTERS HOT SEVEN who were to be our treat for Friday, 7th August 2015.  They were the first of two celebrations for Keith’s birthday and we certainly did not disappoint you, did we!   The band leader, MAURICE DENNIS (banjo/guitarist) had with him MARTIN LITTON (piano), MIKE ‘MEGS’ ETHERINGTON (trumpet/vocals), reeds), PAUL TAYLOR (trombone), ALLAN SOKELL (sousaphone) and GRAHAM COLLICOTT (drums).  At the last minute, Maurice phoned to say they were bringing a singer. As if this band was not enough, we had the beautiful and delightful young American vocalist, MARLENE HILL – wowie, she was lovely.  This was their first appearance at the FARNBOROUGH JAZZ CLUB.  They usually play as an orchestra in theatres across the Country.  When I booked them, I had tried hard to keep it between the band, myself and my immediate family.  I had so wanted it to be a surprise for Keith, but he read the name of the band whilst I was typing an email to Maurice.  Keith is a Luddite – hates computers and doesn’t particularly have that good an eyesight – I was stunned.  As it happens, he had known Martin since he was a young m–an, playing piano just for drinks, at the Steering Wheel Club (the club Keith had run with David Capstick).  So for that reason, Keith’s eyes had picked up quickly!  Anyway, my surprise was now out of the bag.  The evening also had a couple of other birthdays, namely June’s (pictured) and Mike Witt the other, some celebrating was definitely the order of the evening.  We had asked for fancy dress 1920’s/30’s dress style and wow, you certainly made an effort and did us proud.  I should also mention the band were brilliantly dressed in style themselves (striped blazers).  I was so busy greeting everyone on arrival, plus having too good a time myself and unable to list numbers being played, but luckily, they gave me a list they might play, so I was able to make my remarks. I had chosen so many numbers to tell you about and had difficulty cutting down.  I recall their first number was ‘S’ Wonderful’, a great number to kick-start us off immediately.  I’ve skipped some fabulous songs by Marlene – Oh she was super – onto ‘The Charleston’, did our line-dance here, with so many joining in.  Then must mention ‘Jambalaya’, which was super to dance to.  One of my all-time favourites, ‘Christopher Columbus’ – mind-boggling good.  Now we come to Marlene. She was featured next with her wonderful rendition of ‘No Mans Mama’.  What a brilliant voice and she’s looks good too …spit…  Next came another line-dance (we did three!) this time to ‘Bill Bailey’.  Wow, this was powerfully sung by Marlene, what an exciting singer!  The next number was sung by ‘Megs’ (so many great singers around today) and he sang to that popular number ‘Bei Mir Bist Du Shon’, with everyone performing some brilliant solos (trumpet muted with bowler hat)  Next up was to feature super Martin on piano – who was absolutely fab-u-lous, playing ‘Dream a Little Dream’.  I have to mention ‘Mr Sandman’, because Keith actually danced with me!!!!  Well it was his birthday!  And my last choice of number is one Keith and I often harmonise to one-another (ah, how romantic) ‘It Don’t Mean a Thing (if it Aint Got That Swing)’, s’ wonderful.  Oh, and I must mention, Keith added a couple of his limited edition jazz studies to the raffle as a ‘thank you’ to complete an absolutely brilliant evening (great photos are at the end).  Thanks HARRY STRUTTERS HOT SEVEN.

P.S  Before closing, I just need to thank ‘the two Ronnie’s’ filling in for me (Len and John that is) during my recent absence these previous weeks.  I’m told they did a fantastic job on the ‘mike’ – and having been away for three weeks, I may have lost my position on raffle duty- ha.  Also, thanks to everyone for sorting out Keith at the end (clearing up), he certainly came home full of how everyone had helped during my absence. Di xx 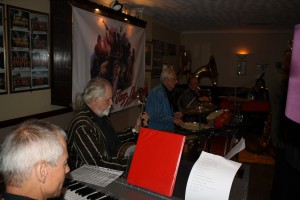 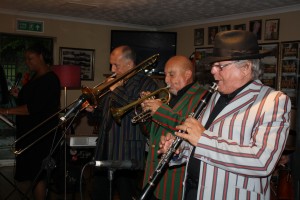 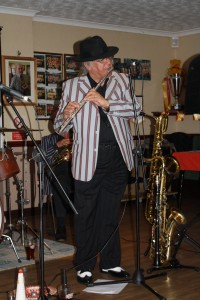 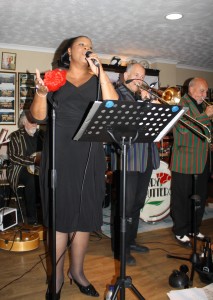 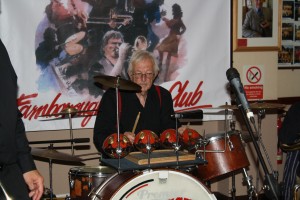 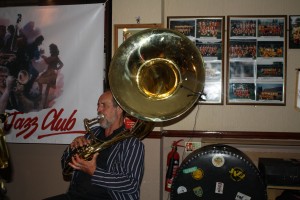 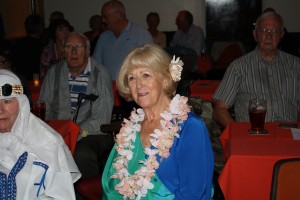 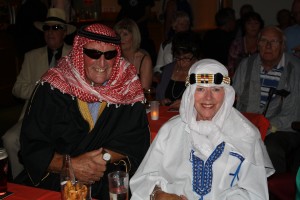 Sandy & Len (behind them are John, Jackie, June (her birthday too) & Jeff- behind them, Trudie plus Linda & Richard) at Farnborough Jazz Club for Keith’s special birthday party with Harry Strutters Hot Seven, 7th August 2015 Photo by Mike Witt (his birthday too). 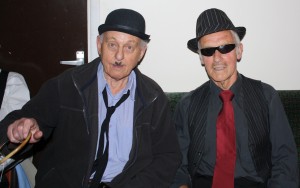